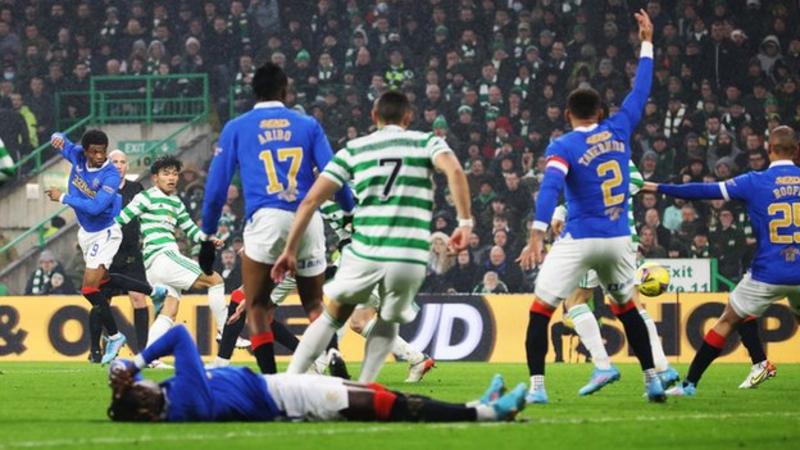 Celtic stormed to the Scottish Premiership summit at the expense of a shell-shocked Rangers after a monumental Old Firm victory ended their rivals’ recent derby dominance.

Ange Postecoglou’s side blitzed their rivals in a relentless first half as a brace from the peerless Reo Hatate was followed by a third from Liel Abada.

Celtic’s levels dropped after the break, but reigning champions Rangers – who made three interval changes – rarely tested Joe Hart in a pedestrian showing at a raucous Parkhead.

Postecoglou’s men are now 18 league fixtures without defeat after ending a seven-game winless run in Old Firm derbies and are at the summit of the division for the first time since August.

But after a 13-game unbeaten start, the defeat is Giovanni’s van Bronckhorst’s first as Rangers manager and could prove to be season-defining – not just because they slip behind Celtic but also due to the crushing nature of the loss.

The Ibrox side’s blockbuster deadline-day signing of Aaron Ramsey added extra fizz to the build-up of what was already being billed as arguably the biggest league encounter between the two in over a decade. And the atmosphere lived up to that.

Celtic Park, without any away fans in attendance, was throbbing and the hosts started at a furious pace roared on by a 60,000-strong home crowd. The opening goal only took five minutes to arrive.

Matt O’Riley’s corner was only cleared as far as Hatate, who took one touch to set himself on the edge of the box before his controlled strike took a nick and beat Allan McGregor down to his left.

Bedlam ensued in the stands as Rangers players protested. They believed the game should have been stopped for a head clash when Joe Aribo and Calvin Bassey collided while clearing O’Riley’s delivery. But referee Bobby Madden consulted his assistant and ruled the goal would stand.

Rangers lacked any intensity or aggression without the ball as Celtic relentlessly pushed for a second.

Goalkeeper McGregor, who was at fault twice in Saturday’s 3-3 at Ross County, was back to his best to deny the hosts with a stunning double save.

First, he got up to his left to stop Jota’s strike before picking himself back up to get behind Giorgos Giakoumakis’ header. On another day, the Greek striker could have had a first-half hat-trick after two further close-range efforts were thwarted.

But the former Scotland keeper could not prevent the outstanding Hatate doubling the hosts’ advantage, when he sliced a delicious effort from the edge of the box inside the right-hand post. Celtic Park erupted again.

Rangers’ minds were scrambled by then. None more so than that of Borna Barisic, who was swamped down the Celtic right and could only gawp in horror as Abada darted in front of him to flash Hatate’s tempting delivery past McGregor to add a third before the break.

Van Bronckhorst threw on Leon Balogun, Ryan Jack and Fashion Sakala at the break, hoping for a reaction, but his side were reduced to hopeful efforts.

Scott Arfield flashed over from the edge of the area and Jack crashed a long-range effort off the crossbar, but they never looked like finding a foothold in the contest, even if Celtic failed to register a second-half shot on target.

But their attacking work was done in a statement first-half performance. Just over a fortnight ago, Postecoglou’s men were six points adrift, now they are in the boxseat.