After six seasons of battling against and surprising English football’s elite, Burnley’s spell in the Premier League came to an end on an emotional afternoon at Turf Moor.

Burnley would have secured a seventh successive campaign in the Premier League if they had beaten Newcastle, but Clarets supporters’ worst fears were realised as they trailed 2-0 after 60 minutes.

It was the final chapter of a huge managerial gamble that has ultimately backfired.

A goal from Maxwel Cornet gave the home fans hope but, despite a frantic finish, Burnley lost 2-1, with Leeds, who started the final day in the relegation zone, jumping above them thanks to a 2-1 victory at Brentford.

What next for Burnley and what does relegation mean financially for the club?

“It’s raw, we’ve got a group of players who are gutted,” said interim boss Mike Jackson, moved up from his position as under-23s coach with eight games to go after the club sacked long-serving and hugely popular manager Sean Dyche.

“There’s a lot of emotion. The fans stuck with us. It’s their club and we’re gutted we couldn’t give them what they wanted. I hope they saw a group fighting for them.”

Burnley players having character and fighting for their club has been their trademark and cornerstone of their success as, despite having transfer and wage budgets far lower than their rivals, they continued to succeed against the odds.

Forward Ashley Barnes, who has been with the club since January 2014, called it a “sad, sad day” and “definitely” the lowest moment of his career.

He added: “We had it in our hands and obviously gave it away.

“We can’t use any excuses – it’s down to ourselves. Three wins in the first 20 games or something is relegation form. We gave ourselves some hope in these last few games but it wasn’t to be.

“We’re all to blame for the job we’ve not done. It lies on our shoulders, especially us older ones.”

Under Dyche, the club won promotion in 2015-16, before he took them into Europe for the first time since 1967 by finishing seventh in the Premier League in 2017-18 – a European journey that included trips to Scotland, Turkey and Greece before losing in the Europa League play-off round.

In their six Premier League seasons, they have gained wins at Chelsea, Manchester United, Arsenal and Liverpool with their hard-to-beat full-commitment style of football.

But this season they began with a nine-game winless run in the league, quickly followed by another 11 matches without a victory and never recovered.

Nevertheless, it was still a surprise when American Alan Pace, who became chairman and owner of the Clarets in December 2020, sacked Dyche in April.

Jackson picked up 11 points in his eight games, but their main failing – a lack of goals – again resurfaced when they needed it most on Sunday.

Burnley now face an uncertain future with a host of big names set to leave the club, while ‘a significant proportion’ of a £65m loan taken out with American financiers MSD Holdings to complete ALK Capital’s takeover in 2020 will have to be paid back. 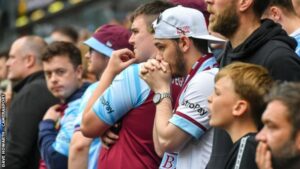