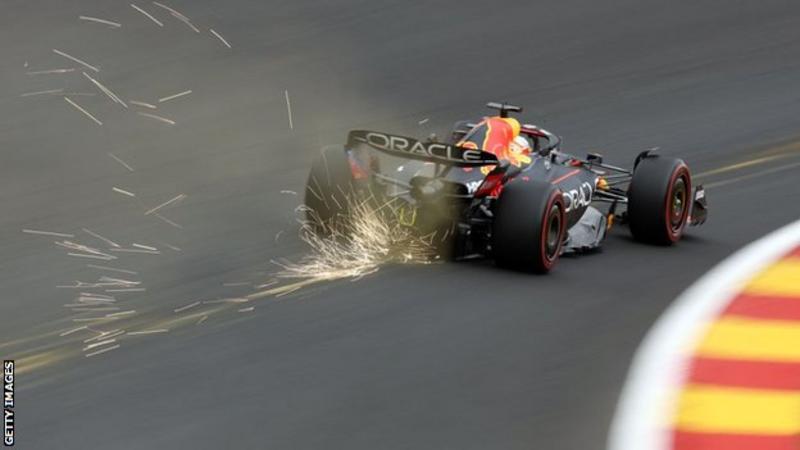 Max Verstappen put in a stunning performance in Belgian Grand Prix qualifying – but Ferrari’s Carlos Sainz will start the race from pole position.

Red Bull’s Verstappen was a remarkable 0.632 seconds clear of the field but a grid penalty for using too many engine parts means he starts towards the back.

Ferrari’s Charles Leclerc and Alpine’s Esteban Ocon qualified fourth and fifth but both also have engine penalties, along with four further drivers.

Verstappen looks set to start 15th, one place ahead of Leclerc.

The Dutchman, who heads Leclerc by 80 points in the championship with with nine races to go, has been in imperious form all weekend and his pace suggests he could even win the race from three-quarters back on the grid on Sunday.

Verstappen said: “It was amazing qualifying but the whole weekend we’ve been on it. The car has been working well and it all came together in qualifying.

“Of course I had to be careful with the tyres I was using and starting at the back.

“We need to move forward, Especially a car like this – it will be a shame not to be on the podium.”

Sainz was pleased to be on pole – and he did his job of winning the battle with Perez as the two drivers from the top teams without penalties – but the Spaniard expressed concern about Verstappen’s pace.

Sainz: “The lap was OK. Happy to be starting on pole but not so happy to see the gap to Max this weekend and the gap Red Bull has on us.

“I am a bit puzzled to see this big gap to Max and Red Bull which makes me wonder what will happen during the race – there is something there to find.”

“We need to keep digging to see why Red Bull are so fast around this track and why we are trailing them, but starting from pole is a good place to start and we will try and win from there.”