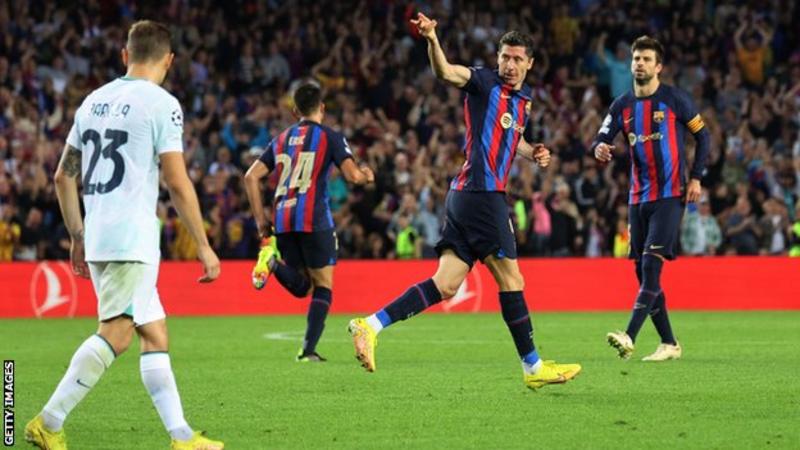 Barcelona are on the brink of a group-stage Champions League exit for the second successive season after being held to a draw by Inter Milan in a breathless and high-octane game at the Nou Camp.

Having been beaten in the San Siro last week, Xavi’s side went into the game knowing that they realistically needed to win to maintain hope of progressing from Group C, with teams on the same points split by their head-to-head record.

The draw leaves Inter – who sit second, behind Bayern Munich who progressed on Wednesday – three points ahead of Barcelona, with both to still play Bayern and Viktoria Plzen.

With Bayern already through, an Inter Milan home win on Wednesday, 26 October (17:45), against bottom side Viktoria Plzen will confirm Barca’s elimination.

Barcelona boss Xavi said: “We’re depending on another team to go through. They are our mistakes, we have to improve them. That’s the reality. The [improvement] process is longer than we thought in Europe.

“There are other competitions, La Liga, the Copa del Rey, the Super Copa. We have to insist, persist, and believe.

“When you draw at home with these fans, with this atmosphere, it is my fault. I am angry. My feeling is that this competition has been, and is still being, cruel with us.” 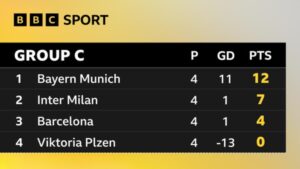 Barcelona took the lead just before half-time when Raphinha did well to keep the ball in, before threading through for Sergi Roberto, who squared for Ousmane Dembele to tap home.

It cued joyous and extravagant celebrations from boss Xavi and the whole Barcelona dugout but that soon turned to despair in the second half.

Nicolo Barella latched onto an Alessandro Bassani dinked ball and lashed into the roof of the net to pull Inter level, before Lautaro Martinez chested a right-wing cross from Hakan Calhanoglu inside Eric Garcia, with his effort hitting both posts before going over the line.

It led to a cauldron of noise at the Nou Camp, and that pressure eventually told when Poland striker Robert Lewandowski saw a header fall back at his feet, and his deflected effort squeezed past Andre Onana.

From there the game descended into chaos.

Inter took the lead again as Onana cleared quickly for Martinez, who squared for Robin Gosens to lash home and leave Barcelona out of the competition again.

However, that was not the end of the drama, as Lewandowski rose highest to meet Garcia’s cross from the right and head past Onana and keep the hosts’ hopes alive again.

Inter then had two chances to win it on the break as Kristjan Asllani was put through but Marc-Andre ter Stegen saved with his legs, before Gosens saw a header saved.