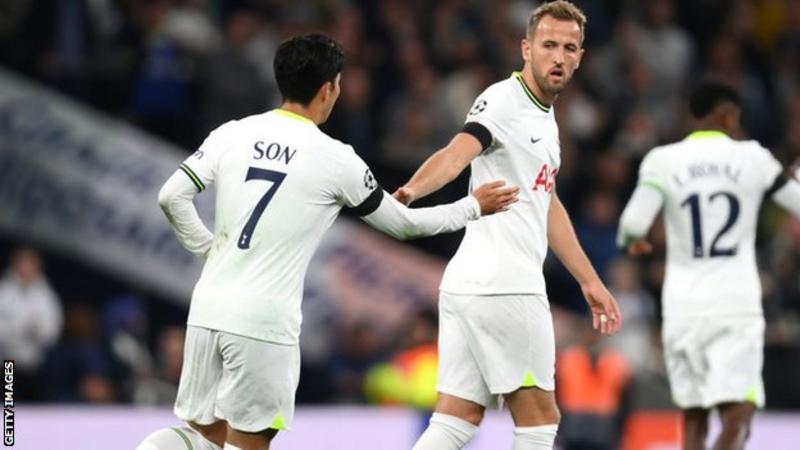 When Son Heung-min or Harry Kane score, the other is usually involved.

It is a combination we have got used to seeing and the pair linked up again for the 50th time in all competitions as Tottenham beat Frankfurt 3-2 to go top of their Champions League group.

Kane set up Son’s equaliser after Frankfurt had taken an early lead, before the 29-year-old England captain scored from the penalty spot.

Son, 30, went on to score a thumping volley in the second half, and despite Kane missing another penalty in stoppage time, both were otherwise on top form at the Tottenham Hotspur Stadium.

“I know what [Kane] likes to do and he’s the same. The relationship has always been a pay-off for hard work. Many more [goals] to come I hope,” added Son.

Since the start of last season, Liverpool’s Mohamed Salah (39) is the only Premier League player with more goals in all competitions than Kane (36) and Son (29).

Tottenham have had a two-year absence from the Champions League and have not hit the heights they once did in Europe under former manager Mauricio Pochettino.

Since their defeat by Liverpool in the 2018-19 final, Spurs have failed to go beyond the last 16 in the Champions League or the Europa League and were knocked out in the group stages of the Europa Conference League last season.

However, their fluent attacking display on Wednesday provides hope they could go further in Europe under manager Antonio Conte.

German football expert Raphael Honigstein said “Spurs are back” after their performance because “they come alive when they go forward”.

“That combination between Son and Kane is incredible,” he added.

“Son is playing with real confidence and that is a testament to how Spurs have adapted to Antonio Conte’s style of football. They are unstoppable like this.”