Kamila Valieva’s anti-doping sample showed traces of three drugs that can be used to treat heart conditions, according to a New York Times report.

The 15-year-old Russian figure skater is being allowed to compete at Beijing 2022 despite testing positive for banned angina drug trimetazidine.

The report said it also showed hyproxen and L-Carnitine, which are not banned.

“Those are three substances that are all used for increasing performance,” he told BBC sports editor Dan Roan on the Sports Desk Podcast, explaining they can increase endurance and reduce fatigue.

The case is ongoing and Valieva has the right to request the testing of her B sample, under World Anti-Doping Agency (Wada) rules.

She goes into Thursday’s free skate top of the standings and on track for victory – but if she finished in the top three, there will be no medal or ceremony until her anti-doping case has been concluded.

The medals for the team event, where she helped the Russian Olympic Committee to victory before learning of the failed test, are also on hold for the same reason.

The International Olympic Committee (IOC) said on Tuesday that Valieva has argued her positive drugs test was due to contamination with her grandad’s medicine.

Neither the IOC nor Russian Olympic Committee has commented on the report that the Stockholm laboratory that processed the sample had found evidence of three drugs.

In its report, the New York Times cited documents filed in Valieva’s arbitration hearing this week and confirmed by someone who took part in the hearing.

Valieva was allowed to continue competing at the Games after the Court of Arbitration for Sport (Cas) ruled that a provisional suspension by the Russian Anti-Doping Agency should not be re-imposed on grounds of her age and the timing of the result, which came almost six weeks after she gave the sample.

Asked if it was a shame that the Valieva case had clouded the Games, Team GB’s chef de mission Georgie Harland said: “Absolutely. It is very sad.

“For many of these athletes, this will be the only time they come to an Olympic Games. This is their experience. They have come here to compete and expect an outcome as part of that. It is highly likely we won’t have that here.” 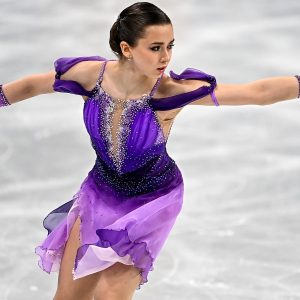