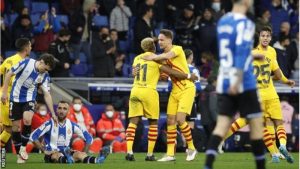 Pedri volleyed in an early opener but the hosts levelled just before half time when Sergi Darder curled in.

Raul de Tomas ran through to drive Espanyol in front in the second half.

Gerard Pique and Nico Melamed were sent off after a clash in added time before substitute De Jong headed in an Adama Traore cross to grab a point that moves them above Atletico Madrid in fourth.

Manu Morlanes, who had come on in the 62nd minute only to go off eight minutes later because of an injury, was also shown a red card at the end of the game.

It was an agonising result for the hosts after they came within seconds of a first derby win over Barcelona since the 2008-09 season.

In the closing stages, Barcelona sent cross after cross into the box in the hope of snatching something and it finally paid off seconds before the final whistle.

Traore’s assist was his second in as many games following his loan move from Wolverhampton Wanderers.