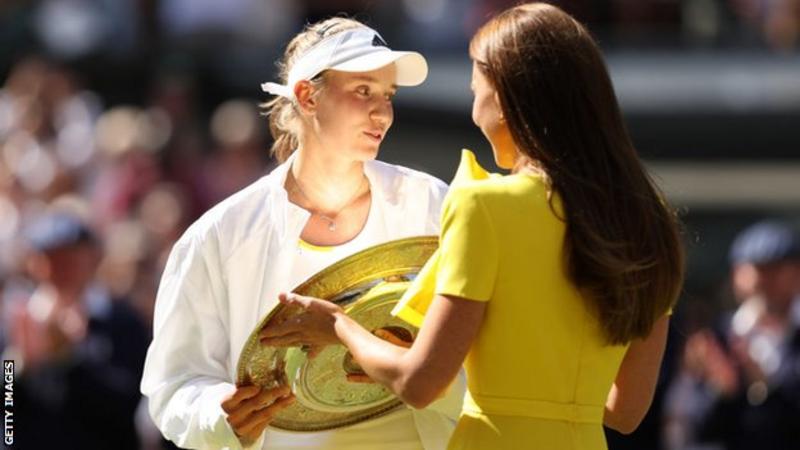 After a shaky first set, she improved and pressured Jabeur into errors.

Rybakina was born in Moscow and her victory comes in a year where Wimbledon banned Russians from playing.

The All England Club did not allow Russian and Belarusian players to compete at this year’s tournament in response to Russia’s invasion of Ukraine.

Rybakina, who changed allegiance in 2018 after receiving greater financial support from Kazakhstan, was presented with the Venus Rosewater Dish by the Duchess of Cambridge, who has publicly supported Ukraine’s fight.

The 17th seed clinched victory with her first match point when Jabeur hit a backhand wide.

Initially there was little emotion from the new champion, who simply raised her right arm in the air as part of a muted celebration.

After sharing a warm hug with Jabeur at the net, Rybakina received a respectful round of applause before then running up a gangway of the stairs to hug her team.

Rybakina had quietly moved through the Wimbledon draw this fortnight, using her height and power to great effect.

Eventually that also proved to be the case in a match against a player of contrasting style and personality.

Going into the final, Rybakina had dropped only one set during the Wimbledon fortnight when she fought back to beat Australia’s Ajla Tomljanovic in the quarter-finals.

But Jabeur, full of slice and variety, settled the quickest to break Rybakina’s serve twice and race away with the opening set.

Rybakina showed no nerves in a powerful semi-final display against 2019 champion Simona Halep, but handling those in all pomp and prestige of a first Grand Slam final was a different proposition.

Eventually she settled down and the contest suddenly took a change of direction at the start of the second set.

A loose service game from Jabeur was seized upon by Rybakina, who had began to rediscover the level that got her to this stage.

Rybakina backed up the break for a 2-0 lead and, while she had to continue working hard for her holds, moved a double break ahead at 4-1 as the errors crept into Jabeur’s shots.

After sealing the second set, Rybakina broke again at the start of the decider and Jabeur looked increasingly despondent.

But the tension mounted again in a sixth game which almost swung momentum back to world number two Jabeur.

After a 0-40 lead, Jabeur thought she had landed the second of three break points with a clipped forehand but the line-calling technology said it was out.

Rybakina fought back to hold and then broke in the seventh game to leave her serving for the championship.

Jabeur led 15-30 but sprayed a forehand wide to bring up championship point, which Rybakina took when Jabeur hit a backhand wide.