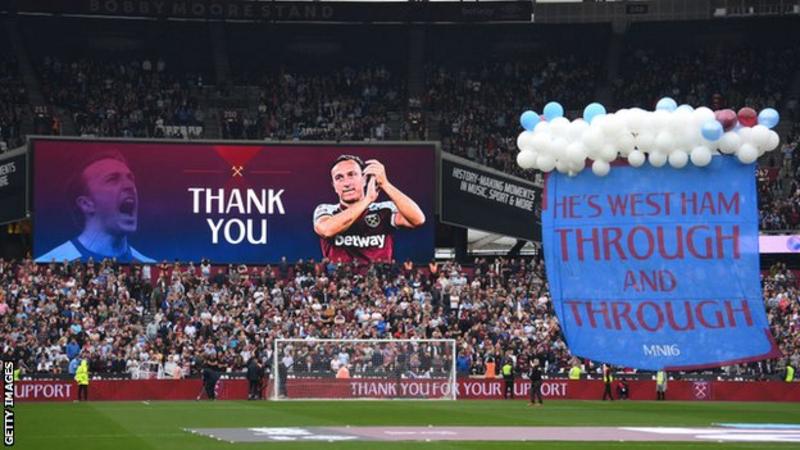 Manchester City’s game at West Ham on Sunday could have been the match that all but confirmed Pep Guardiola’s side as Premier League champions.

But when the final whistle blew at London Stadium after a breathless encounter which ended 2-2 and featured Riyad Mahrez missing a late penalty – one which would have as good as won the title for the visitors – it was the home fans who were celebrating a memorable moment of their own.

A game played out in a raucous atmosphere culminated in West Ham legend Mark Noble emerging from the tunnel with his children to receive a guard of honour following his last home appearance for the club, taking in the adulation of a 60,000 crowd, almost all of whom had stayed behind to show their appreciation.

Manchester City will have to wait for their own joyous celebrations, their party spoiled for now. Their champagne remains on ice, but for West Ham supporters this was an “I was there” moment, one to live alongside the best they have experienced since moving from Upton Park, like November’s 3-2 win over Liverpool and an epic victory over Sevilla in the Europa League in March.

This was a thrilling game which both sides knew they could have won, might easily have lost and ended up pretty pleased to have drawn – and one that was followed by a farewell to a true club legend.

In the end, the winner was a stadium condemned by so many since it was opened in 2016.

The atmosphere that, it was complained, did not exist most certainly does. It turns out all it really needed was a decent team.

“Bits of it [the atmosphere] today was fabulous,” said West Ham manager David Moyes. “This year the stadium and crowd have been fantastic. But I think that is because the players have been so good. They don’t give in. They keep at it in every game.”