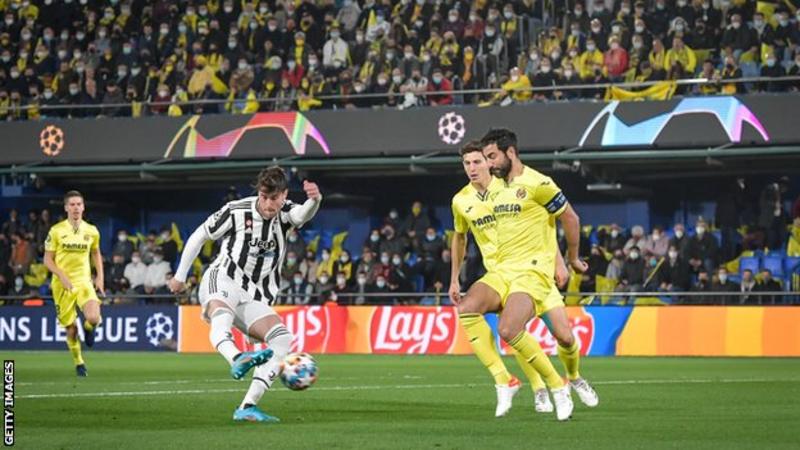 Dusan Vlahovic scored the quickest Champions League debut goal ever but Juventus were pegged back to draw at Villarreal in the last 16 first leg.

The 22-year-old Serb, a £58m signing from Fiorentina last month, ran onto Danilo’s long ball before a swivel and clever finish after 32 seconds.

Villarreal’s Giovani lo Celso sliced a shot off the outside of the post.

The leveller came when Dani Parejo ghosted in to finish from Etienne Capoue’s aerial ball into the box.

Juve were fortunate to end with 11 men as Adrien Rabiot was only booked for a dangerous foul on Samuel Chukwueze.

With the away goal rule scrapped this year the tie is level going into the second leg in Turin in three weeks.

Massimiliano Allegri’s Juve are unbeaten in 90 minutes since November but they were made to pay for their negativity at Estadio de la Ceramica.

They moved to a back five after scoring that first-minute goal and then switched off as Parejo was unmarked to fire in a leveller.

A Vlahovic shot from outside the box in the 85th minute was their only other shot on target.

Villarreal, who have never lost a home game in the Champions League knockout stages, pushed for a winner but definitely missed injured Spain striker Gerard Moreno.

Arnaut Danjuma, who has deputised up front and scored a hat-trick at Granada on Saturday, had a clever backheel shot saved in the first half.