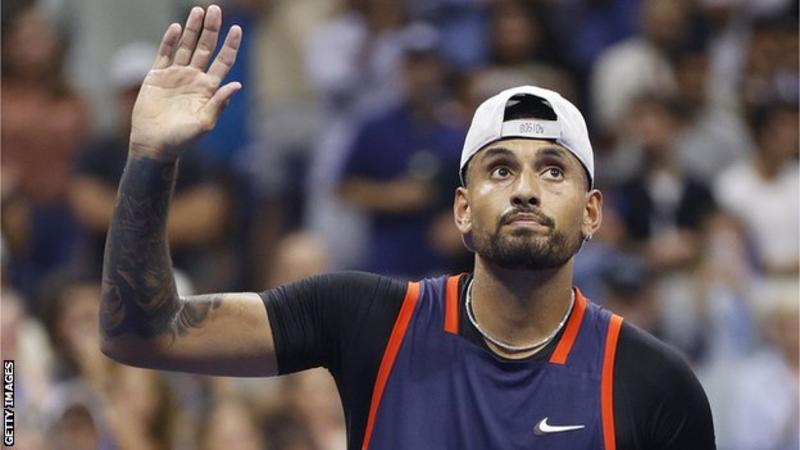 Nick Kyrgios ended Daniil Medvedev’s defence of the US Open title as he earned an enthralling four-set win on an entertaining night in New York.

Medvedev, 26, will lose his ranking as world number one after the defeat.

Wimbledon runner-up Kyrgios goes on to play another Russian, 27th seed Karen Khachanov, in the quarter-finals.

“It was an amazing match, obviously Daniil is the defending champion and a lot of pressure on his shoulders, but I’ve been playing amazing recently,” said 23rd seed Kyrgios, who will move back into the world’s top 20 after the win. 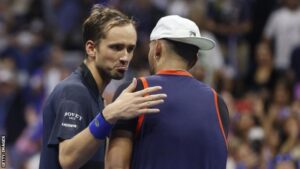 Apart from Serena Williams’ farewell, this was the biggest blockbuster of the tournament so far and a match-up between two entertaining players which would have befitted the latter stages.

The pair have been two of the standout players on the ATP Tour in recent months, with Kyrgios winning the most tour matches since the start of June with 25 victories and Medvedev next behind him – and alongside Britain’s Cameron Norrie – on 18.

Both players promised beforehand to “put on a show” on the Sunday night of a holiday weekend in New York.

They did not disappoint.

“It was a really high-level match,” said Medvedev, who compared Kyrgios’ level to that of Novak Djokovic and Rafael Nadal.

“If he plays like this till the end of the tournament, he has all the chances to win it. But he’s going to get tough opponents, so it’s not sure.”

Kyrgios took first blood for a 4-2 lead in the first set, whipping up the fans before he converted the break point, with Medvedev mimicking his opponent’s actions as he instantly hit back.

A tense tie-break, packed with quality and drama, saw Kyrgios save three set points and twice clatter his racquet against the court before converting the fourth opportunity of his own to take the lead.

Kyrgios popped off for bathroom break after the 64-minute opening set as a shirtless Medvedev complained to the umpire about the noise from the Australian’s box while he was serving.