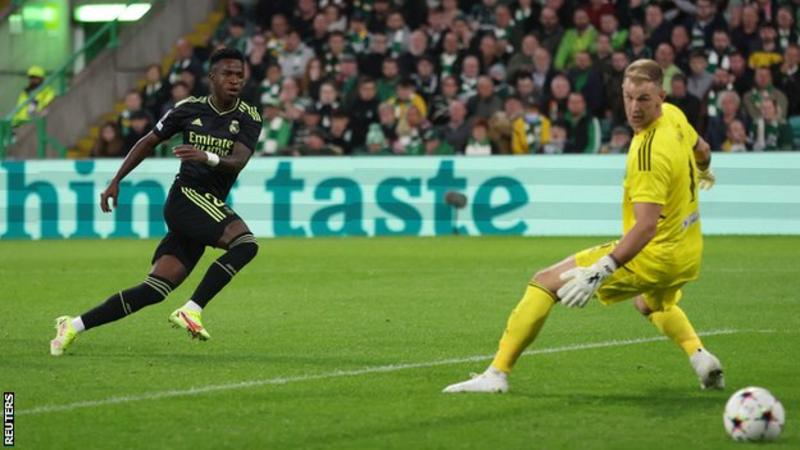 Celtic were ultimately outclassed by holders Real Madrid in their Champions League opener, despite a lively and encouraging start in Glasgow.

Five years after they last featured at Europe’s top table, Celtic gave Real a fright in a frantic first half by creating a series of chances, including a shot off a post from Callum McGregor.

But after the break the visitors roused themselves, and goals from Vinicius Junior, Luka Modric and Eden Hazard showed their class and secured victory.

Carlo Ancelotti’s side – who lost Karim Benzema to injury in the first half – join Shakhtar Donetsk at the top of Group F after they defeated RB Leipzig.

Celtic travel to Warsaw to face the Ukranian side next Wednesday in their second group game, aiming to get their campaign back on track, after their grand return against European football royalty ended in disappointment.

But it was not a dispiriting night at a bouncing Celtic Park as the Scottish champions made a good impression on the biggest stage.

Ange Postecoglou vowed his team would be true to their front-foot style despite Real’s quality, and it was in evidence straight from kick-off as they pressed Thibaut Courtois into kicking the ball out after 12 seconds. From the throw-in, Liel Abada lashed just wide as the stadium roared its approval.

It was not a flash in the pan either, with the Israeli winger set free in behind the defence after a wonderful pass from Jota, but his rushed shot went straight into Courtois’ hands.

And after McGregor rattled an upright from the edge of the area and half-time substitute Daizen Maeda scuffed a brilliant opportunity from six yards, there was a sense of foreboding that Celtic’s missed chances would haunt them.

A flowing move which started at the feet of Courtois ended with Vinicius planting Federico Valverde’s cross in the bottom corner, before Hazard set up Modric to caress home at the second attempt.

With Celtic suffering from their first-half exertions, Real controlled the ball with greater ease and put together a stunning 33-pass move which culminated in Kroos picking out Dani Carvajal, who stroked across goal for Hazard to tap home their third.

Celtic kept fighting to the end and still looked a threat in flurries, but ultimately they were outclassed in the second-half by the 14-time kings of Europe, whose quality shone through.

Player of the match – Luka Modric 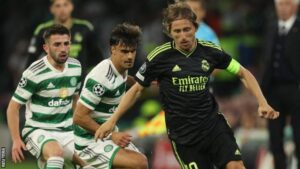