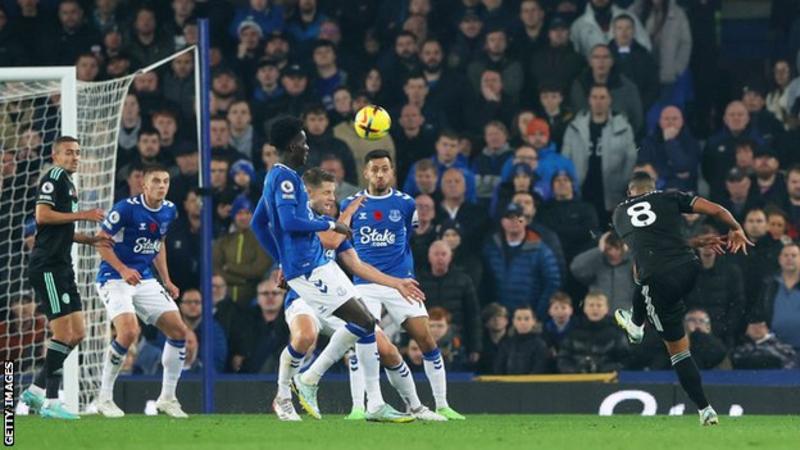 Leicester City climbed out of the Premier League relegation zone as Youri Tielemans’ sensational first-half strike set Brendan Rodgers’ side on their way to a thoroughly deserved victory at Everton.

Tielemans controlled James Maddison’s cut-back with his thigh before sending a dipping effort into the top corner of Jordan Pickford’s goal from the edge of the penalty area.

Harvey Barnes put the result beyond doubt in the closing stages, rifling a powerful shot past Pickford for his fifth league goal of the campaign.

The visitors dominated the first half but missed several opportunities to take the lead prior to Tielemans’ moment of inspiration on the stroke of half-time.

Rodgers’ team continued to create the better openings in the second half, Patson Daka blazing over the crossbar from a good position and the outstanding Maddison striking the outside of the woodwork with a curling, long-range shot.

Everton striker Dominic Calvert-Lewin was forced off with an injury just after the hour-mark to cap a miserable afternoon for the Toffees and their supporters.

The win lifts Leicester up to 13th – two places above the Toffees due to their superior goal difference.

Maddison’s sparkling display will have done his hopes of a place in Gareth Southgate’s England World Cup squad no harm whatsoever.

The 25-year-old was at the heart of the Foxes’ best attacking moves but the visitors’ finishing proved their downfall early on, Pickford producing a one-handed save to deny Daka before Barnes blazed over the crossbar from Kiernan Dewsbury-Hall’s pass.

The only thing missing from Maddison’s performance was a goal. James Tarkowski and Idrissa Gueye both produced blocks to deny the former Norwich man in the first half, before he rattled the woodwork with an ingenious effort midway through the second half.

He did, however, set up both Leicester goals – the first of which was a contender for goal of the season from Tielemans. The Belgium international is out of contract next summer but Rodgers has said he will “continue to work with” the 25-year-old despite his uncertain future.

Just as Everton appeared to be pushing for an equaliser, Barnes collected Maddison’s lay-off before beating Pickford with a ferocious effort.

After conceding 22 goals in their first eight league games of the campaign, Leicester have shipped just three in their previous six.