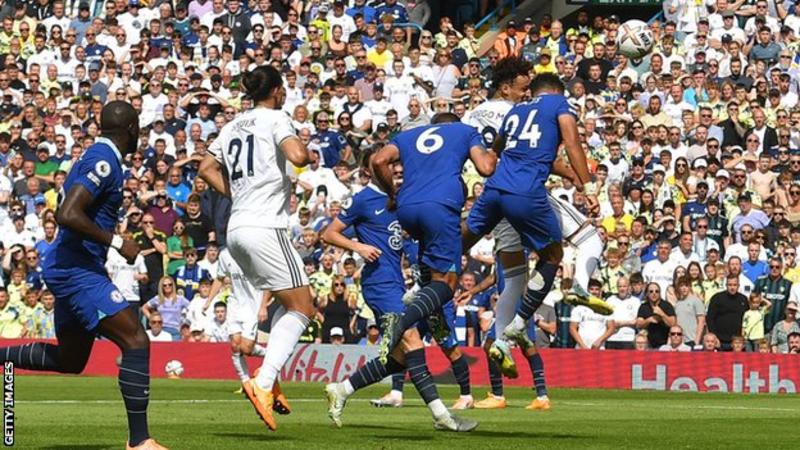 Leeds continued their unbeaten start to the season as they secured a famous win over Chelsea’s new-look team with a display which will cause Thomas Tuchel nightmares.

Chelsea, who spent more than £170m on players over the summer, were the architects of their own downfall in the first half.

Four minutes later Raheem Sterling gave away a free-kick on the edge of the box, from which Rodrigo scored his fourth of the season after Jack Harrison’s delivery.

But Leeds also out-fought their opponents, particularly in midfield, in echoes of the famous historical battles between the two rivals.

And they sealed a first Premier League win over Chelsea in seven attempts, dating back to 2002, when Harrison scored after Daniel James’ cross was touched to him by Rodrigo.

An already raucous Elland Road was in disbelief at that moment; the home fans taunted their Chelsea counterparts and manager Jesse Marsch punched the air in wild joy.

Yet there were chances for the visitors. Sterling curled wide in the first minute and had a goal disallowed, while Marc Cucurella, signed for £62m, was also off-target twice.

But when Kalidou Koulibaly was sent off six minutes from time for a second booking, it summed up Chelsea’s afternoon, allowing Leeds fans to wallow in the elation of a superb start to the season as their team moved into second place in the table.

Having secured their Premier League survival on the final day of last season and lost both Kalvin Phillips and Raphinha to Manchester City and Barcelona over the summer, Leeds’ story was expected to be one of how they would cope.

But with boss Marsch making several key signings, there was a spirit and team ethic in Leeds which Chelsea could not match. They were helped too by a crowd which was already deafening before kick-off and only increased in volume as the visitors fell apart.

After a positive start, which saw Tyler Adams get the upper hand in midfield on Conor Gallagher, who was making his full Chelsea debut, the atmosphere took off in the 33rd minute following Mendy’s error.

Aaronson, who was signed from RB Salzburg in the summer, had already shown his endeavour in midfield and the American chased down Thiago Silva’s backpass to open his Leeds account in the easiest fashion possible once keeper Mendy lost the ball a yard from the goal.

Four minutes later Elland Road was in disbelief and Marsch was charging down the touchline. Harrison’s set-piece caused problems once again and Rodrigo doubled United’s lead to become the Premier League’s top scorer with four goals this season.

The second half was mostly about containment as Chelsea searched for an equaliser. But Leeds’ defence was equal to the task, with a third goal allowing fans to enjoy a brilliant day in the Yorkshire sunshine.

There are bound to be difficult days to come over the season, but this will give Marsch sceptics plenty to consider – and the American lapped up the applause from all four sides of the stadium with fans singing his name.