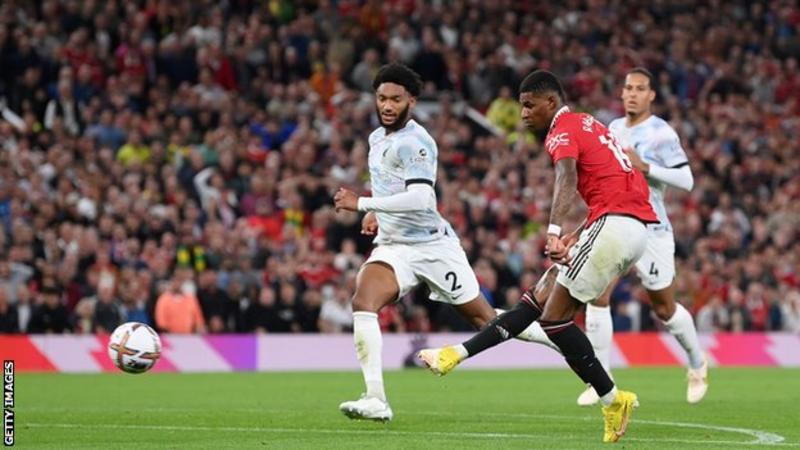 Ten Hag took the bold decision to drop captain Harry Maguire and Cristiano Ronaldo and was rewarded with a performance that lifted the mood of crisis around Manchester United and leave Liverpool still searching for a first win of the season.

Mo Salah set up a tense finish when he scrambled in a header with nine minutes left but United survived to give Ten Hag just the sort of triumph he needs to make his mark at Old Trafford.

Manchester United were at their lowest ebb after a 4-0 humiliation at Brentford followed an opening day home defeat by Brighton.

And while thousands protested against the ownership of the Glazers before kick-off and the chants continued throughout the game, United’s fans rallied behind a performance of fierce intensity and commitment that left Liverpool bullied for long periods.

New £60m signing Casemiro was paraded in front of the Stretford End before kick-off and how he must have relished the magnificent atmosphere inside Old Trafford as United turned the misery of their abject first two league performances on its head.

Liverpool won 5-0 here last season and 4-0 at Anfield but United mustered more energy and aggression in the first 10 minutes here than in both of those embarrassing performances.

Ten Hag employed pace to take advantage of Liverpool’s high defensive line and they should have been ahead even before Sancho opened the scoring, Anthony Elanga hitting the post after racing clear.

United contested every challenge with a fired up Lisandro Martinez setting the tone early on with a robust challenge on Mohamed Salah.

Rashford’s form has been indifferent in recent times but his confidence will surely soar after the composed manner in which he scored what eventually proved to be the winner.

And this was a landmark night for Ten Hag, who knew his decision to leave out Maguire and Ronaldo would have brought scrutiny had United lost.

Instead, he enjoyed the sort of night that he will hope gets his Old Trafford reign up and running.