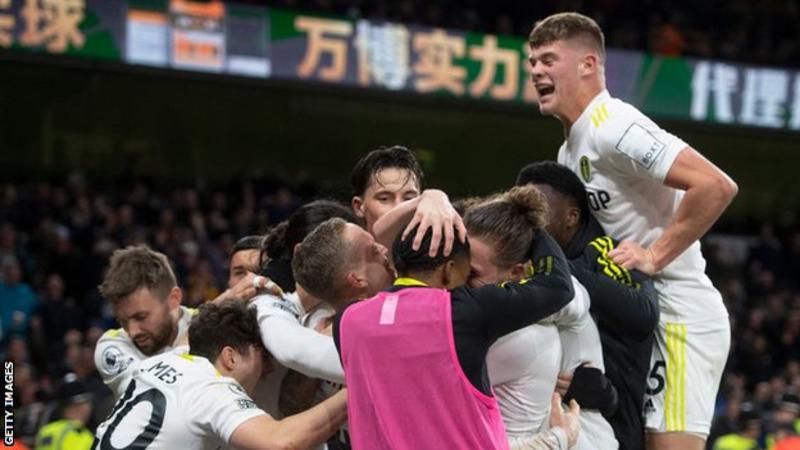 Luke Ayling scored an injury-time winner as Leeds came back from two goals down to beat 10-man Wolves in a pulsating encounter at Molineux and move seven points clear of the relegation zone.

A bizarre, bruising and breathless Premier League contest was turned on its head by Raul Jimenez’s red card eight minutes into the second half.

At that point, Wolves were cruising, ahead in the game thanks to Jonny’s first goal since July 2020 and a superb effort from Francisco Trincao in the 11th minute of first-half stoppage time – and facing a side forced into three injury-related first-half substitutions.

But when Jimenez, who had already been booked, collided with Illan Meslier chasing a 50-50 ball, referee Kevin Friend decided the Mexican was at fault and produced a second yellow card.

The Leeds keeper could not continue and became the fourth visiting player to be replaced because of injury, joining the the only recently returned Patrick Bamford on the bench.

Amid the chaos, Wolves completely lost their way. Jack Harrison turned home the loose ball after Ayling had first struck a post to make it 2-1, then had the rebound cleared off the line.

And three minutes later, after a Dan James effort had come back off the woodwork, Rodrigo’s shot flew in as Conor Coady tried to clear off the line.

Then, just as eight minutes of injury time was being signalled, Ayling reacted quickest as the ball bounced on the edge of the six-yard box and smashed it home before being mobbed by ecstatic team-mates.

The incident-packed game also included a protestor attempting to tie themselves to the Wolves goal when the ball was at the other end of the pitch in the second half.

Unlike at Everton on Thursday, this time the stewards reacted quickly enough and dragged the culprit away.

The desire for victory was seen in the melee on the touchline that followed Leeds’ winner.

Both sets of coaching staff got themselves in a push and shove, with Leeds midfielder Kalvin Phillips and Wolves defender Marcal continuing the verbals after order had been restored.

Phillips had run across the pitch to celebrate Ayling’s winner and was the only one pumped up as proceedings unfolded.

By the end, Wolves coach Bruno Lage was reacting with fury at every decision from referee Friend that was not to his liking.

When he has cooled down, Lage will realise his side were the architects of their own downfall.

Jimenez will argue he was unlucky to be sent off but it was a challenge the Mexican did not have to make, with his side already two goals ahead, controlling midfield and Leeds running out of personnel and ideas.

At that stage, Joao Moutinho was running midfield and Willy Boly was outstanding at the back, Wolves having survived a couple of early scares as Rodrigo and Bamford failed to take their chances.

The result cost them a place in the top six and ended a two-match winning sequence.

They also lost the services of Ruben Neves as the midfielder was forced off halfway through the opening period. 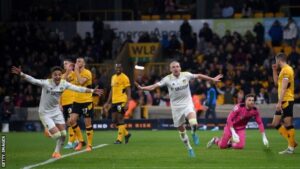