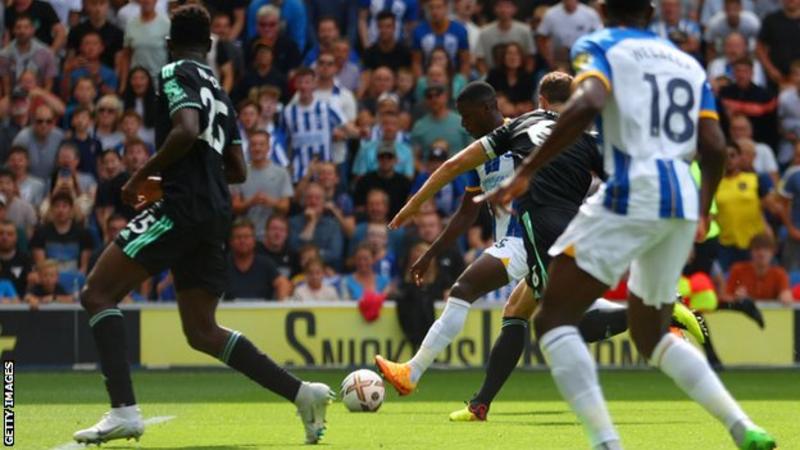 Brighton fought back from conceding a first-minute goal to beat struggling Leicester City in a seven-goal thriller at the Amex.

Leicester, bottom of the Premier League, scored after only 51 seconds when Kelechi Iheanacho finished from Patson Daka’s pull-back from the left.

However, the lead only lasted eight minutes before Solly March’s header deflected into the net off Leicester defender Luke Thomas.

Brighton went ahead in the 15th minute, capitalising on a loose pass from James Maddison with Moises Caicedo scoring after being set up by Enock Mwepu.

But in a frantic first half, Leicester scored again after 32 minutes. Youri Tielemans, deep inside his own half, played a ball over the top of the Brighton defence, Daka held off Lewis Dunk’s challenge and slotted the ball past Robert Sanchez for 2-2.

Alexis Mac Allister thought he had restored the Seagulls’ lead with a spectacular strike from 30 yards but, after a video assistant referee check that lasted more than four minutes, the goal was eventually ruled out for offside.

It did not prove to be crucial as Leandro Trossard scored Brighton’s third from Pascal Gross’ pass, with Trossard then winning a penalty, which Mac Allister converted for the fourth.

Fittingly, the last say went to Argentina midfielder Mac Allister who curled in an excellent 25-yard free-kick in injury time for his second goal and Brighton’s fifth.

The result maintains Brighton’s excellent start to the season and they are fourth in the Premier League, while Leicester, with just one point from six matches, are three points adrift at the foot of the table.