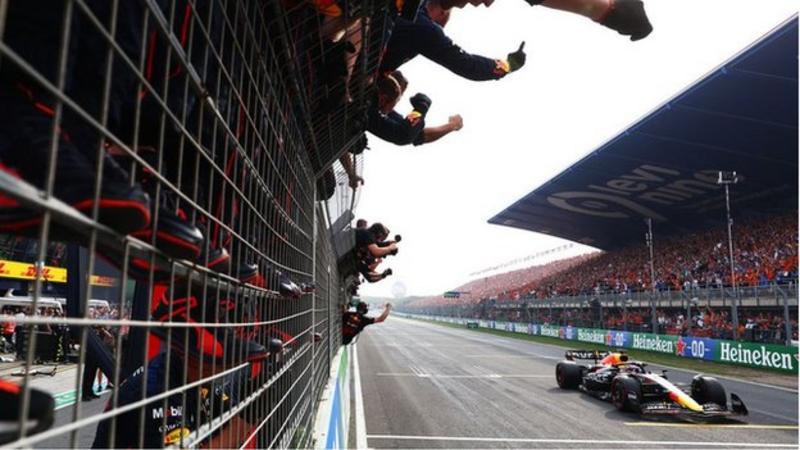 Max Verstappen’s serene march to a second title continued with a comfortable victory in an eventful Dutch Grand Prix.

The Red Bull driver had to pass Lewis Hamilton’s Mercedes after a late safety-car period to take his 10th win in 15 races this year to extend his lead to 109 points.

Hamilton was left fuming after Mercedes failed to change his tyres during the caution period.

That left him vulnerable and allowed team-mate George Russell and Ferrari’s Charles Leclerc to pass him after the restart to take the other podium places.

Hamilton, who briefly had slim hopes of a victory with about 20 laps to go, saw them evaporate in a situation remarkably similar to the way in which he lost his eighth world title in Abu Dhabi last year.

He managed to hang on to fourth ahead of Red Bull’s Sergio Perez, Fernando Alonso’s Alpine and Lando Norris’ McLaren. Ferrari’s Carlos Sainz finished fifth on the road but was demoted to eighth after a five-second penalty for an unsafe pit stop release. 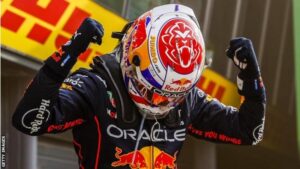 Verstappen had been cruising to victory until a couple of caution periods in the final part of the race.

Hamilton and Russell had moved past Leclerc using what was planned to be a one-stop strategy rather than the two used by Verstappen and Ferrari.

Verstappen would have had to pass both Mercedes after his second stop but he was saved needing to by a bizarre sequence of events involving Yuki Tsunoda, driving for Red Bull’s sister Alpha Tauri team.

Tsunoda stopped on track after a pit stop saying a wheel was not on, but was told by the team that it was and to continue. He pitted, only to stop on track and force a virtual safety car.

Verstappen used the VSC to pull in for his second stop and switched on to the hard tyre for what he expected to be the remainder of the race.

Mercedes, who had already made what they expected to be their only stop at that point, took the opportunity of the VSC to stop again and fit medium tyres.

When the VSC period ended, Hamilton began closing in on Verstappen, reducing his lead from 15.4secs to 10.7secs in six laps.

But then with 16 laps to go there was a safety car when the engine in Valtteri Bottas’ Alfa Romeo failed and he stopped on the pit straight.

Verstappen pitted again for soft tyres, putting him behind both Mercedes but on better tyres, and then a lap later, as the field was directed through the pits, Russell made the call to do the same, while Mercedes did not change Hamilton’s mediums.

That left Verstappen right behind Hamilton for the restart on much grippier tyres, and he swept around the Mercedes at the first corner after the restart to take back control of the race.

Hamilton swore on the radio to his team, saying he could not believe how much they had messed him up, as first Russell and then Leclerc passed him and deprived him of the podium place it appeared he had earlier locked away.

Verstappen’s second home win in as many years since Zandvoort returned to the calendar last year sent a capacity crowd of 105,000 wild, on a weekend that was effectively a festival devoted to worshipping a national hero. 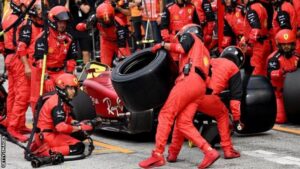