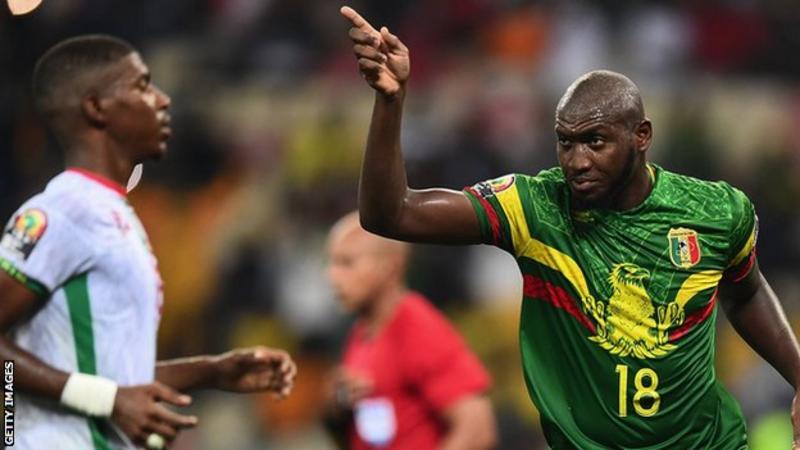 Mali secured top spot in Group F at the Africa Cup of Nations with a comfortable 2-0 win over Mauritania, who were already out of the tournament.

The opening goal was scored in the second minute by former Newcastle defender Massadio Haidara.

Mali doubled their tally shortly after half-time when Ibrahima Kone smashed in his third penalty in Cameroon after Moussa Doumbia was brought down.

Victory means Mali win the group on goal difference and will play Equatorial Guinea in the round of 16, while Mauritania exit as the only team at the Nations Cup without a point.

The opener came from good work down the right and a cross which Doumbia failed to connect with cleanly.

However, the ball dropped to Lens’ Haidara, who was free to bounce his effort back across goal and inside the right-hand upright.

Mali dominated the first half and created the better chances, with Mauritania having to make do with set piece opportunities.

The Eagles passed the ball well and, after Doumbia was fouled by Souleymane Karamoko, Norway-based Kone flashed his powerful spot-kick past Babacar Diop.

Mauritania’s best chances of getting back into the game came from free kicks, but first Guessouma Fofana hit his straight at the keeper and then Adama Ba forced a much more difficult save from Ibrahim Mounkoro.

Kone, who sits two goals behind Cameroon’s Vincent Aboubakar in the race for the golden boot, had a chance to add to his tally but he dragged his shot across goal and wide of the far post.

Haidara was later denied his second of the game by a smart Diop save from a free-kick.

While Mauritania head home without even a goal to their name, Mali will travel back along the coast to Limbe, where they played their first two group games, to take on Algeria’s conquerors Equatorial Guinea, who finished runners-up in Group E.