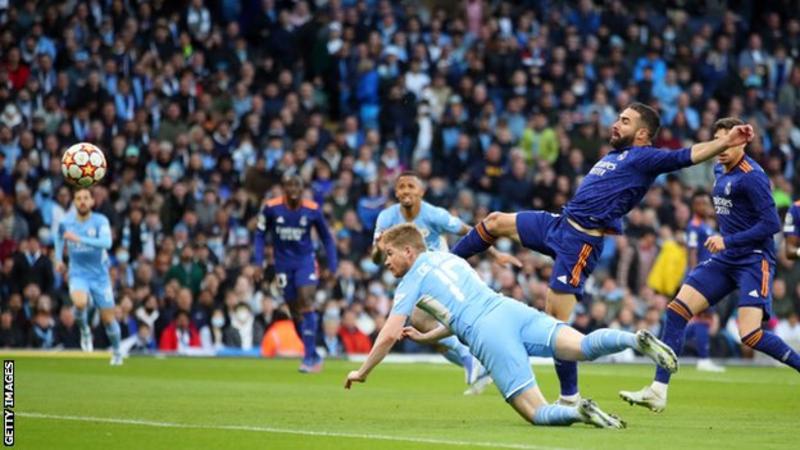 Manchester City will take a slender Champions League semi-final advantage to the Bernabeu after winning a seven-goal first-leg classic against Real Madrid at Etihad Stadium.

City delivered a magnificent display as they peppered Real’s goal for long periods but Carlo Ancelotti’s side kept rising off the canvas to somehow keep themselves in serious contention to reach another final.

Kevin de Bruyne set the tone for a magical night of football with a diving header from Riyad Mahrez’s cross in the second minute and in-form Gabriel Jesus quickly added a second from close range as Real reeled under wave after wave of attacks.

The Spanish side escaped again shortly after the break when Mahrez struck the post but City restored their two-goal advantage when an unmarked Foden headed home Fernandinho’s cross in the 53rd minute.

City were pegged back again when Vinicius Junior dummied past Fernandinho and ran from inside his own half to score a superb second for Real.

However, a brilliant use of advantage from referee Istvan Kovacs allowed Bernardo Silva to fire into the top-left corner for City’s fourth.

There was still no let-up and Benzema capped a spectacular game by showing nerves of steel to chip a Panenka penalty past Ederson with eight minutes left following Aymeric Laporte’s handball.

Liverpool face Spanish side Villarreal in this year’s other semi-final, with the first leg at Anfield on Wednesday. 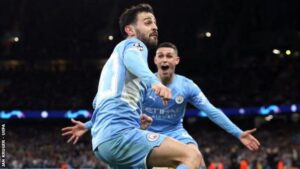 City would have taken any sort of advantage to Spain before kick-off but deep down they will know their almost total dominance of Real should have given them much more than this narrow lead for the second leg.

Guardiola’s side were simply irresistible for spells and could have been four goals ahead before Benzema struck Real’s first, the manager clearly infuriated by Mahrez’s selfishness in shooting with Foden standing unmarked in front of goal at 2-0.

Guardiola and his players will take heart from the manner in which they carved Real open so often and they will hope to capitalise on their opponents’ need to press for a goal in Spain.