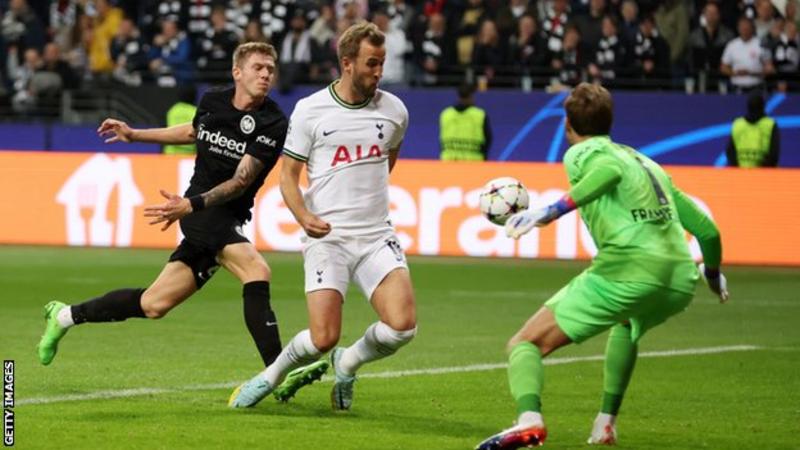 Tottenham were left to rue a number of missed chances as they were held to a goalless draw by Eintracht Frankfurt in the Champions League.

The visitors, looking to respond after losing to Premier League rivals Arsenal at the weekend, put in a largely encouraging display but were let down by poor finishing.

Harry Kane was agonisingly close to turning in a Son Heung-min cross before then swiping a shot wide in the first half, while Ivan Perisic saw a deflected strike go just wide of the far post before the break.

But the hosts also had chances, with Hugo Lloris needing to produce a smart save to deny Ansgar Knauff’s volley from close range and Jesper Lindstrom drove over from a good position.

The pace of the game slowed in the latter stages, with neither side seemingly willing to take risks and go for the win.

The result means Tottenham are second in Group D with four points after three games, two points behind leaders Sporting Lisbon, who lost 4-1 at Marseille earlier on Tuesday.

Eintracht Frankfurt, meanwhile are level on points with Spurs but in third place on goal difference.

A useful point, but could have been more

After losing their last Champions League game 2-0 to Sporting and 3-1 to Arsenal in the north London derby at the weekend, Spurs fans will have wanted a response from their side in Germany.

Tottenham boss Antonio Conte gave the same XI players who started against the Gunners the chance to make amends but, initially, it was the spirited hosts who started strongly.

They had their opponents pegged back in their own half at times but as the game wore on Tottenham took control, showing more urgency along with improved passing.

Kane and Son’s link up was also encouraging with the latter providing his team-mate with two good opportunities in the first half, but Kane was unable to make the most of either of them.

Spurs struggled to build on that in the second half, but with back-to-back homes games coming up in the Champions League this should be seen as a good point as they look to progress from the group stage.