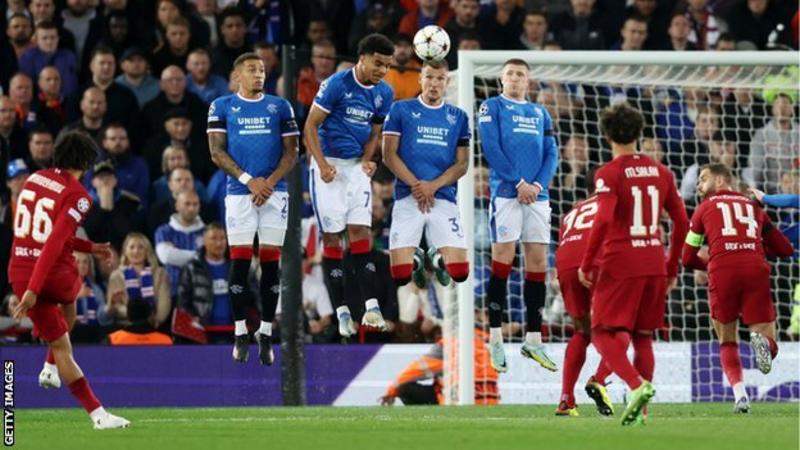 Liverpool cruised to a confidence-building victory in the Champions League as Rangers were comfortably dismissed at Anfield.

Jurgen Klopp’s side have struggled for form this season but a disappointing Scottish team represented the perfect opposition to return to winning ways as Liverpool moved closer to a place in the knockout phase.

Rangers fans travelled to Merseyside in their thousands and backed their side noisily throughout an embarrassingly one-sided encounter which Liverpool should have won far more emphatically.

Trent Alexander-Arnold put Liverpool ahead after only seven minutes when he clipped a perfect 25-yard free-kick into the top corner and only veteran keeper Allan McGregor kept the Rangers in range with a succession of saves, frustrating Darwin Nunez in particular.

Liverpool finally got the second goal they deserved eight minutes after the break when Mohamed Salah scored from the penalty spot after Leon King fouled Luis Diaz.

Rangers, who have not won a point from three games in Group A, had a late chance when Kostas Tsimikas cleared off the line from Rabbi Matondo but they were outclassed by a Liverpool side who did not need to hit top gear to win.

Liverpool get an easy ride

The build-up to this Champions League confrontation contained the usual ‘Battle of Britain’ narrative as Rangers travelled south of the border to Anfield to test their credentials against one of the Premier League elite.

In reality, this was over as a contest once Alexander-Arnold demonstrated perfect technique to curl his free-kick beyond McGregor. Liverpool never looked back and Rangers never mounted a serious threat.

Liverpool’s only disappointment was that they did not make the most of the host of chances they created, with the hard-working Nunez hitting the target with most of his efforts and showing good movement, only to put his finishes too close to McGregor on too many occasions.

For all their domination, Liverpool relied on a brilliant free-kick and a penalty to secure the win.

It was the ideal game for them to gain some rhythm and momentum, with Klopp selecting an all-out attacking line-up with a front four of Salah, Nunez, Diaz and Diogo Jota.

They will surely face a tougher test at a hostile Ibrox in the return game but this simply could not have been more comfortable, making it a satisfactory night for Klopp, who wanted to see Liverpool edging somewhere back towards their best.

The win also leaves Liverpool well placed to reach the knockout stage, sitting second with six points from three games and a three-point lead over third-placed Ajax, who lost 6-1 at home to Napoli.