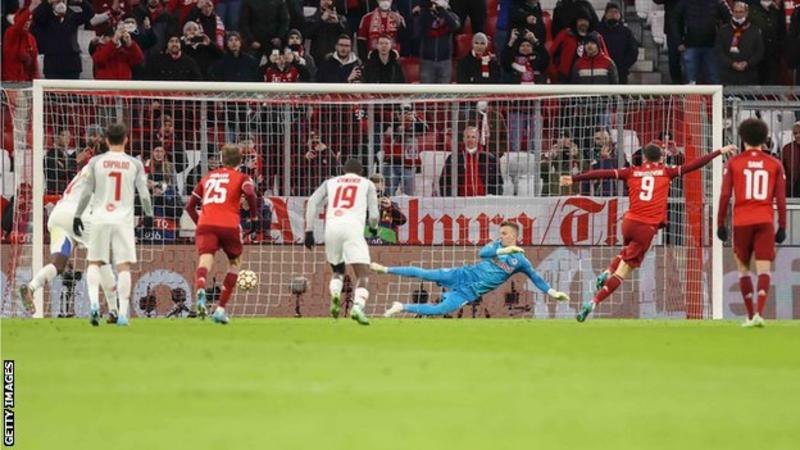 The Poland captain, on his 100th start in the competition, confidently stroked home two penalties inside 21 minutes, after twice being recklessly brought down by Salzburg defender Maximilian Wober, the second confirmed after a VAR review.

The first spot-kick, swept into the bottom-left corner, was Lewandowski’s 40th goal of the season in all competitions.

He added his third after chasing down an attempted clearance from visiting goalkeeper Philipp Kohn to tap in from close range.

It is the first time a Champions League hat-trick has been completed as early as the 23rd minute, although it is not the quickest treble in the competition, with that record held by Bafetimbi Gomis following his three goals in eight minutes for Lyon in a 7-1 win over Dinamo Zagreb in 2011.

Bayern’s quick start put them firmly in control of a game that had been billed as “all or nothing” by some in the Bavarian media after the six-time winners were held to a disappointing 1-1 draw in the first leg in Austria.

Matthias Jaissle’s Salzburg had early chances with Nicolas Capaldo and Nicolas Seiwald both guilty of failing to convert glorious opportunities.

They were made to pay for their profligacy by the deadly Lewandowski before another mistake in defence allowed Serge Gnabry to add a fourth with a low shot that squirmed under Kohn, while Thomas Muller thumped in a fifth after the break.

On an otherwise bleak night for the visitors Maurits Kjaergaard did at least mange a consolation with a powerful effort into the top-left corner.

But that only seemed to stir Julian Nagelsmann’s team back into life, with Muller finishing off a well-worked move for number six before Leroy Sane thumped home late on.

Much had been made of Bayern’s defensive vulnerabilities after they only scraped a late draw in the first leg, and Salzburg appeared to have real hope of becoming the first Austrian team to reach the last eight of this competition since 1985.

But when it came to it they simply had no answer to a masterclass at the Allianz Arena, with Lewandowski the catalyst for a simple yet ruthless night’s work by the hosts.

The 33-year-old twice outfoxed Wober to set the tone for the second leg and his third – as he reached 85 Champions League goals in three fewer matches than Lionel Messi and 17 before Cristiano Ronaldo – was all about his determination to keep going.

After Ronaldo (seven) and Messi (five), Lewandowski is now only the third player to score 10 or more goals in three or more different Champions League campaigns.

And not content to rest on his laurels after becoming the top scorer in this season’s competition, Lewandowski was also involved in Muller’s second before teeing up Sane for Bayern’s seventh of the night.