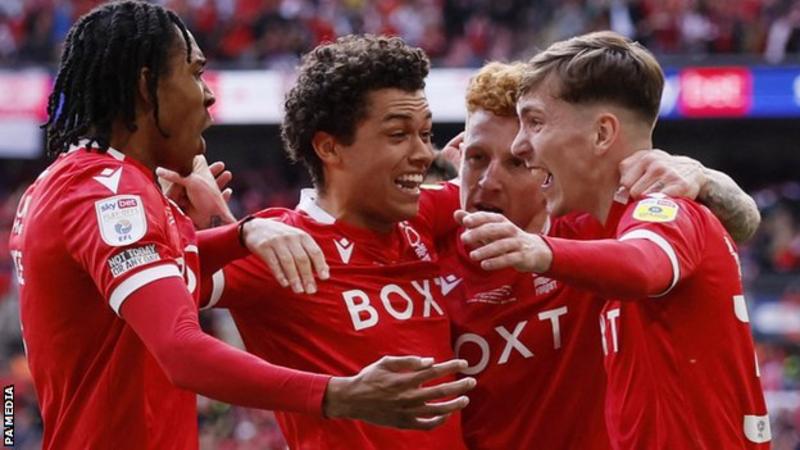 Nottingham Forest ended their 23-year wait for Premier League football with a narrow win over Huddersfield Town in the Championship play-off final at Wembley – a victory worth about £170m.

Promotion back to the top flight caps a brilliant turnaround to their season, which had started with six defeats in seven.

Levi Colwill’s own goal from James Garner’s cross was the decisive moment.

Town improved after the break but struggled to create a big chance.

Their best opportunity saw Harry Toffolo booked for diving in the area by referee Jon Moss, officiating for the final time before retiring, and, although replays suggested Jack Colback had made some contact, it was not overturned by VAR.

Forest held out in the face of mounting pressure to spark scenes of jubilation and end their two-decade exile from the Premier League.

Steve Cooper has completely turned the club’s fortunes around after taking over from the sacked Chris Hughton in September.

They were not at their best in their first appearance at Wembley in 30 years but the game’s big moment went in their favour before the break.

The impressive James Garner, on loan from Manchester United, whipped in a dangerous ball from the inside left position and Town defender Colwill could only divert the ball past his goalkeeper Lee Nicholls under pressure from Ryan Yates.

The Terriers had more possession and carried more threat after half-time but could not force Brice Samba or his replacement Ethan Horvath into a save of note.

Forest’s promotion in their first ever play-off final comes at the end of a season which started disastrously.

The two-time European Cup winners took one point from their first seven games – their worst start to a season in 108 years – and when Hughton was sacked in September it looked like the team was likely to spend the campaign battling against relegation.

However, Cooper, who had taken Swansea to the play-offs in his two seasons in south Wales, quickly turned the ship around and they eventually moved into the top six for the first time this season on 9 February.

There were also impressive home FA Cup wins over Arsenal and local rivals Leicester City before being narrowly beaten by eventual winners Liverpool in the quarter-finals, as the momentum around the team and city grew.

Like opposite number Carlos Corberan, Cooper has thrived off the back of good recruitment, including the season-long loan addition of Middlesbrough full-back Djed Spence and Manchester United midfielder Garner by his predecessor, and excellent coaching, with Wales forward Brennan Johnson enjoying a breakout campaign.

There was some disappointment though when their bid to take their fight for automatic promotion to the final day was ended by defeat at second-placed Bournemouth in their penultimate game of the season.

They regrouped and looked to be cruising to play-off semi-final victory over Sheffield United before conceding two second-half goals in the second leg at the City Ground to take the tie to penalties, where Samba saved three Blades spot-kicks to send them to Wembley.

It was by no means a vintage performance at the national stadium but they will not care, and start next season as a top-flight team for the first time this century.