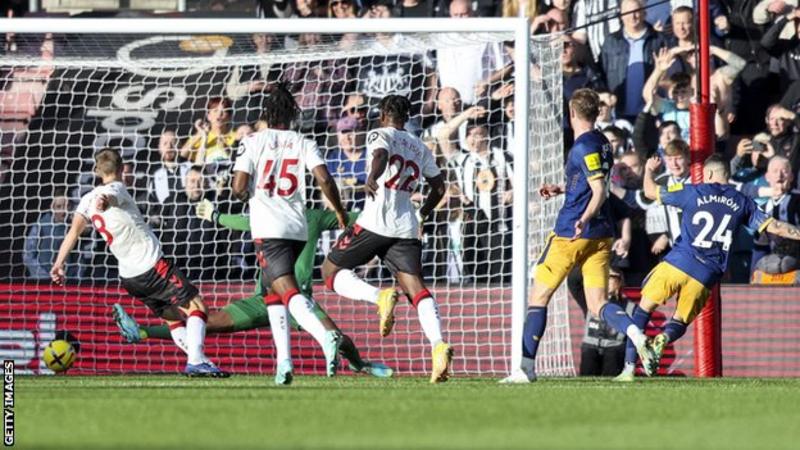 Miguel Almiron continued his scoring streak as Newcastle consolidated their spot in the Premier League’s top four with another confident victory.

The Paraguay forward put the visitors ahead at half-time following a strong run and composed finish for his seventh goal in seven games.

Southampton, who are struggling for goals, wasted chances before Newcastle substitute Chris Wood swivelled sharply and fired into the corner.

The hosts were further punished when Joe Willock added the third, finishing a quick counter attack led by Kieran Trippier with an accurate finish.

From that point, Newcastle looked certain to extend their unbeaten run to nine matches.

Southampton did pull a consolation back through Romain Perraud’s fine solo strike, only for Bruno Guimaraes to restore the three-goal advantage with a superb curler.

The Saints have only won one of their past eight matches and will finish the weekend third from bottom.

What a way for Newcastle to celebrate Eddie Howe’s first anniversary in charge.

On Tuesday, it will be 12 months since former Bournemouth boss Howe took over and the mood during this win – on the pitch and in the away stand – was another timely show of the positivity flowing through the club.

The transformation under Howe’s leadership has been remarkable.

He took over with Newcastle 19th in the top flight, five points from safety after 11 games last season.

Now they are mounting a challenge for Champions League football next season, while Manchester City manager Pep Guardiola even ranks them among the title challengers.

Nobody has epitomised Newcastle’s improvement under Howe more than Almiron.

The Paraguay international has been one of the star performers in recent weeks, driving the team forward with intelligent runs and scoring a hatful of eye-catching goals.

The opener at Southampton was another illustration of his thriving confidence.

Picking the ball inside the home half, he burst forward with purpose and showed determination to hold off a challenge from Ainsley Maitland-Niles before finding the bottom corner with Newcastle’s first shot on target.

That set the platform for the visitors – who had to withstand periods of pressure – to go on and earn what was eventually a comfortable win.

Howe was not entirely happy with his side’s overall performance, saying it was not at the “same heights” as previous weeks.

After an emphatic win that moved them third, it shows how high expectations have quickly risen under Newcastle’s new regime.