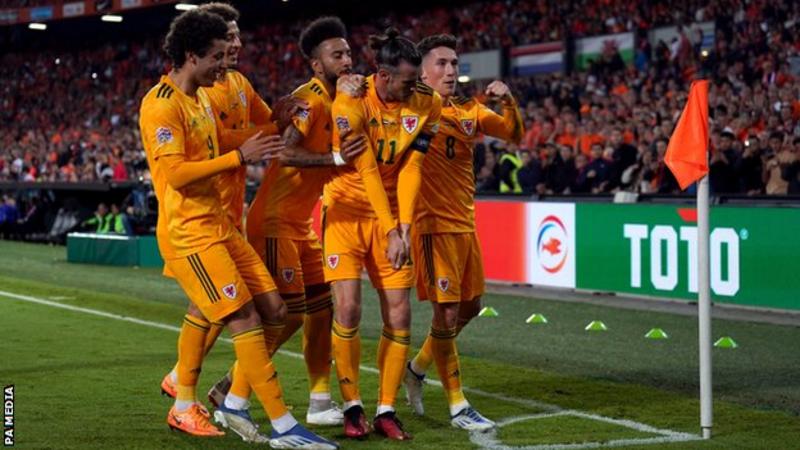 The Netherlands finished their international window with a dramatic hard-fought Nations League win over Wales at the Stadion Feijenoord.

The hosts dominated the first quarter of the match and when Noa Lang and Cody Gakpo scored six minutes apart it looked like Wales could be in for a very long evening in Rotterdam.

Rob Page’s side kept their composure, though, and found a route back into the game against the run of play when Brennan Johnson bagged his second in as many games.

With time running out, substitute Connor Roberts went down in the Dutch area after an aerial challenge and referee Horatiu Fesnic pointed to the spot.

Gareth Bale calmly dispatched the 92nd-minute penalty, low into the right corner, to send the travelling Wales fans delirious, only for Memphis Depay to win it for the Dutch straight from the restart.

For all Wales’ efforts it is a third defeat in the Nations League from four games and they find themselves bottom of Group A4 – although their qualification for the 2022 World Cup will mean this international period will ultimately be deemed a successful one.

The Netherlands remain unbeaten in Louis van Gaal’s second stint in charge and sit comfortably at the top of the group.

Wales struggled to find their rhythm in the opening exchanges, regularly conceding possession in dangerous areas.

Matt Smith was the first to do so in the third minute as the ball was pinched off him by Lang but, as former Spurs striker Vincent Janssen latched on to his through ball, Chris Mepham got back to clear the danger.

Wayne Hennessey was called into action soon after, Gakpo’s crossfield ball gave Lang a shooting opportunity but his effort from distance was straight at the keeper.

As the home fans started Mexican waves the Dutch took the lead.

Wes Burns was at fault for losing possession cheaply as Jordan Teze found Janssen. He crossed for Lang, who twisted one way, then the other, before firing low into the corner.

The Dutch soon had their second. Gakpo’s initial effort was well blocked by a combination of Mepham and Joe Rodon, but the rebound fell perfectly to the PSV Eindhoven winger who curled into the far side of the net.

Under Page, Wales have rarely found themselves two goals down; the last time was against Denmark in the last 16 at Euro 2020.

And they showed great resilience to hit back on 26 minutes.

After scoring his first international goal at the weekend against Belgium, Johnson followed it up with another in style. 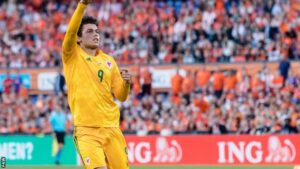