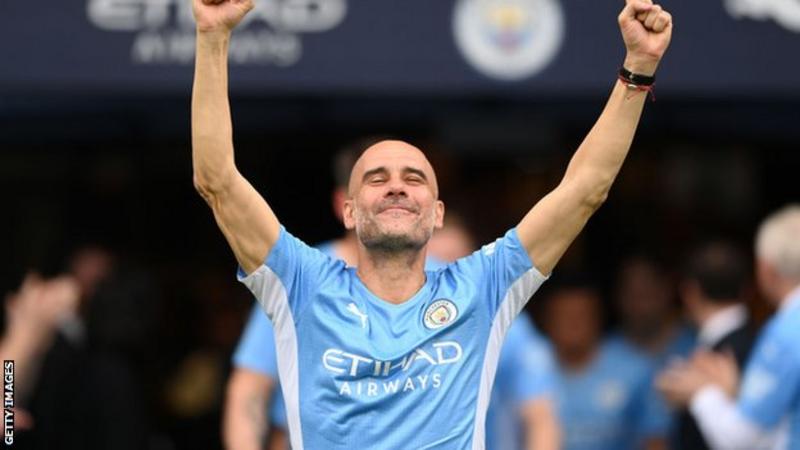 Manchester City manager Pep Guardiola said his side were “legends” after they secured their fourth Premier League title in five seasons.

City won the league by a point over challengers Liverpool with a stunning 3-2 comeback win against Aston Villa on the final day at Etihad Stadium.

It is Guardiola’s 11th trophy in six years since coming to England.

“We are legends. We will be remembered. This group of players are absolutely eternal in this club,” said Guardiola.

“What we achieved, it is so difficult to do it. Sir Alex Ferguson with Manchester United has done it years ago – two or three times – now I realise again the magnitude of doing this. Now we are part of this.”

City were 2-0 down to Villa with 15 minutes left before substitute Ilkay Gundogan scored twice, either side of midfielder Rodri’s goal, in a sensational five-minute comeback.

Had they not won, Liverpool would have been champions.

“The last game is always special – a lot of emotion,” Guardiola said. “Aston Villa gave everything but the first goal changed everything. We had to handle it.

“When you win the Premier League in this country four times in five seasons, it is because these guys are so, so special.

“Winning at home in front of our people is the best. The moment we equalised, we had the feeling we had the chance to score the third.

“It was the best atmosphere I have ever lived since I am here. Hopefully tomorrow we can celebrate together in Manchester’s streets with our cigars and beers. I will bring my cigars, don’t worry.”

Liverpool won 3-1 at home to Wolves but could do nothing to stop Manchester City defending their title.

The top two sides lost just five games between them in the league all season.

“Congratulations to Liverpool – they have made us better and better each week.”

Asked whether he planned to stay beyond his current contract, which expires at the end of next season, he added: “I don’t have the energy or desire to think about next season now.

“Every season is more difficult. I would not betray the club – they give me probably the most incredible moments in my life but I have to feel it, the players have to feel it and the club has to feel it.

“Now it is time to celebrate. We are champions again.”