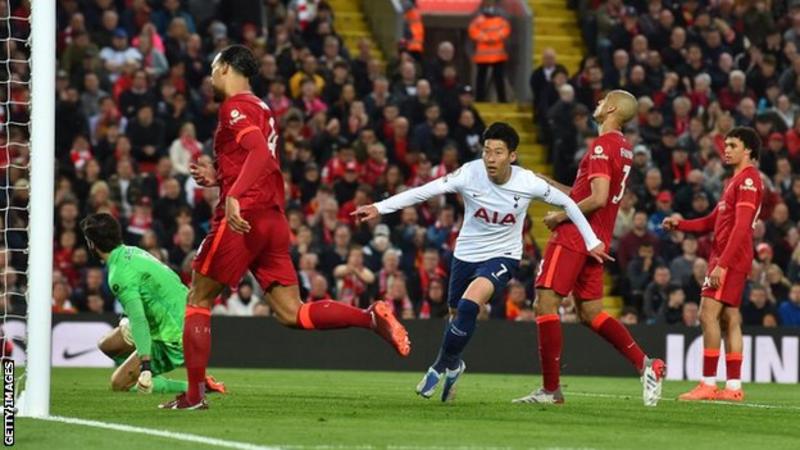 Liverpool moved top of the Premier League but dropped two precious points in the title race with Manchester City as they drew against a resilient Tottenham Hotspur side at Anfield.

Son Heung-min swept the counter-attacking visitors in front after 56 minutes following a link-up between Harry Kane and Ryan Sessegnon and with the Liverpool defence disorganised.

Liverpool naturally flooded forward for an equaliser and it took a heavily deflected shot from Luis Diaz 16 minutes from time to draw the home side level and set up a grandstand finish.

Spurs defended with resolution after the equaliser though and were also a threat on the break as they battled to take something from the game to aid their top-four challenge.

The point takes Liverpool top on goal difference but Pep Guardiola’s side can move three points clear with three games remaining if they defeat Newcastle United on Sunday.

Liverpool at least maintained their unbeaten Premier League record – which now stretches to 16 games, including 13 wins and three draws – but time will tell how damaging this failure to beat Spurs will be as the title race reaches its climax.

Jurgen Klopp’s team have set magnificently high standards but it was inevitable they would not be able to find a way to win every time and they were up against a side brilliantly organised by visiting coach Antonio Conte.

Liverpool swarmed over Spurs from the start but once the early storm blew over they could not find many clear openings through a resolute defence, in which Cristian Romero was outstanding.

Virgil van Dijk struck the woodwork before the break – as did Pierre-Emile Hojbjerg – but Mohamed Salah and Sadio Mane were kept largely quiet, as they were after the break too.

Diaz was the main threat, as he arguably has been since he arrived in January, and deserved his goal even if it was aided by a big deflection off Rodrigo Bentancur.

Liverpool were roared forward by a Kop desperate for another piece of late Anfield drama but too many crosses went astray and too many moves foundered on the rock of the Spurs defence.

Klopp’s side have relentlessly pursued City in the past two months knowing any slip-up would be damaging and after these dropped two points must now hope Guardiola’s side lose rather than merely draw one of their remaining games in order to reel them in. 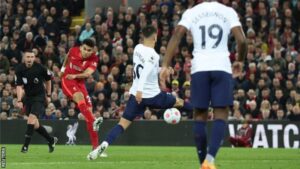