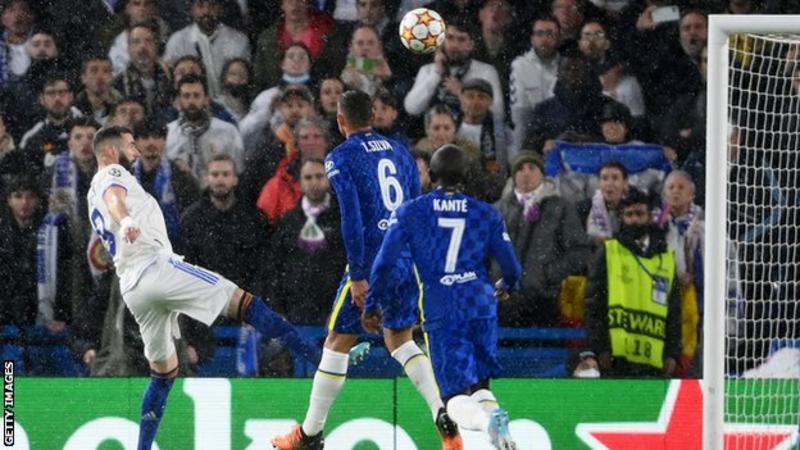 Real coach Carlo Ancelotti made a winning return to the club where he won the Premier League and FA Cup double after veteran France striker Benzema delivered his latest masterclass.

Benzema, 34 and fresh from the treble that sunk Paris St-Germain in the last 16, punished holders Chelsea with two magnificent headers in the space of three minutes midway through the first half.

Kai Havertz’s header gave Chelsea hope before the break but keeper Edouard Mendy’s poor clearance seconds after the restart gifted Benzema his third to put Real in command of the tie before the second leg at the Bernabeu next Tuesday (12 April).

Chelsea battled to the end of this first leg but were always fighting an uphill task after they were hit by Benzema’s brilliant one-two and then saw their hopes of mounting a comeback wrecked by a self-inflicted wound.

Real had already delivered a warning about the danger they posed when Vinicius Junior hit the bar but that went unheeded as he provided the cross for Benzema’s flying headed opener.

And once Benzema had confirmed his aerial threat with a second, Chelsea were always vulnerable against a side who are the masters of these Champions League situations. 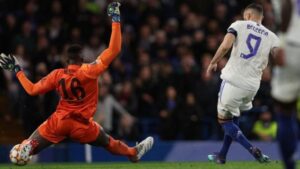 Havertz, the match-winner in last season’s Champions League final win against Manchester City, gave a subdued Stamford Bridge some hope but the entire destiny of the tie may have turned in the opening 40 seconds after the interval.

Mendy, normally so reliable, made an expensive misjudgement when he raced from goal only to send a weak pass in the direction of Antonio Rudiger.

The defender was unable to gain control and the predatory Benzema was in like a flash to roll the ball into the unguarded net with Mendy looking on in anguish.

It came just after Chelsea manager Thomas Tuchel had introduced Mateo Kovacic and Hakim Ziyech at the start of the second half to build on Havertz’s goal, but the changes were undermined before they had any chance to take effect.

Tuchel later brought on Romelu Lukaku in a desperate attempt to retrieve the situation but his struggles were summed up when he sent a weak header wide with one of Chelsea’s best chances of the night.

Chelsea have demonstrated an ability to overcome adversity in the past but with Real holding a two-goal advantage going into the second leg at the Bernabeu, it would rank as one of their finest achievements if they were to reach the last four from this position.