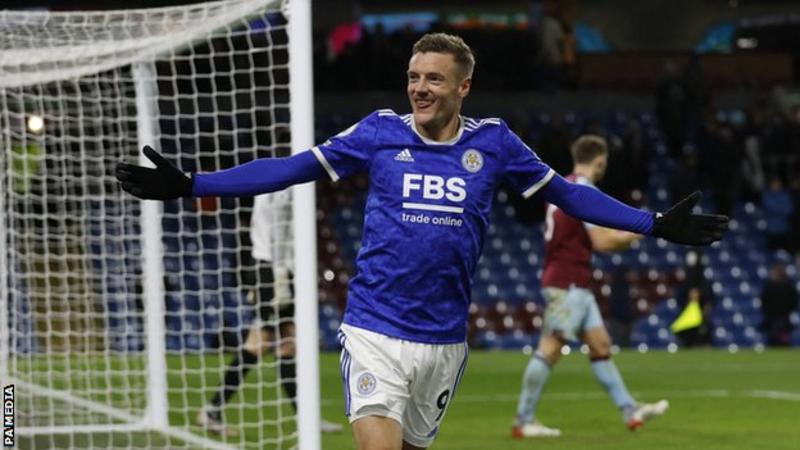 Leicester claimed their first Premier League win of 2022 as second-half goals from James Maddison and the returning Jamie Vardy gave them victory over a Burnley side who remain in the relegation zone as a result.

Midfielder Maddison struck a fine decisive finish, curling a shot into the bottom corner from outside the box after being set up by Vardy, making his first appearance of the year after injury.

And the striker sealed the points with a close-range header from Kiernan Dewsbury-Hall.

It had been a largely even game before that, although the Foxes did fashion the greater number of chances, finding home keeper Nick Pope in fine form.

The Clarets had the ball in the net in the first half, but Maxwel Cornet was adjudged to have moved a fraction early to tap in Aaron Lennon’s low cross.

The win takes the Foxes to 30 points and allows them to breathe more easily after a poor recent run of league results.

There is no respite for Sean Dyche’s side, who have seen their recent crucial revival checked and stay in the bottom three, a point behind 17th-placed Everton.

After two fifth-place finishes, this league campaign is now one of earning Premier League respectability while continuing to challenge for the last remaining piece of silverware on offer – the inaugural Europa Conference League.

There have been extenuating circumstances for the Foxes’ downturn this season, not least of all Vardy’s extended absence, but they have looked a soft touch at times at the back, with the gradual sapping of confidence taking away their attacking verve.

Prior to this game, they were the only side without an away clean sheet in the top flight this season, shipping 25 goals in 11 games on the road as part of a run of 18 top-flight matches away from the King Power Stadium without stopping the opposition scoring.

They had also conceded a league-high 18 times from set-pieces.

This result – and the performance to earn it – was crucial then, coming against a side with two wins and a draw from the past three matches, scrapping for every point and providing of the sternest of tests to a defence from corners and free-kicks.

As pleasing for Brendan Rodgers as the two goals – both superbly taken by two substitutes providing that requisite touch of class from the bench – will be the way his side kept the Clarets contained.

Aside from Cornet’s disallowed tap-in, the home side were kept to half-chances, with the Ivorian poking another effort wide in the second-half and Wout Weghorst failing to convert at the back post shortly after Leicester’s opener.

Better chances came at the other end, with Nick Pope required to demonstrate his strong positioning and reflexes on a number of occasions to deny Ricardo Pereira, Patson Daka and Harvey Barnes.

The icing on the cake was Vardy’s sharpness after coming on. He acrobatically volleyed one effort over, was quick and smart to stay onside and latch on to Kasper Schmeichel’s clearance to set up Maddison and perfectly placed to claim his goal.

He will now be champing at the bit to start against Leeds on Saturday. Burnley, meanwhile, have a tough trip to Chelsea as they again seek to claw their way out of the bottom three.