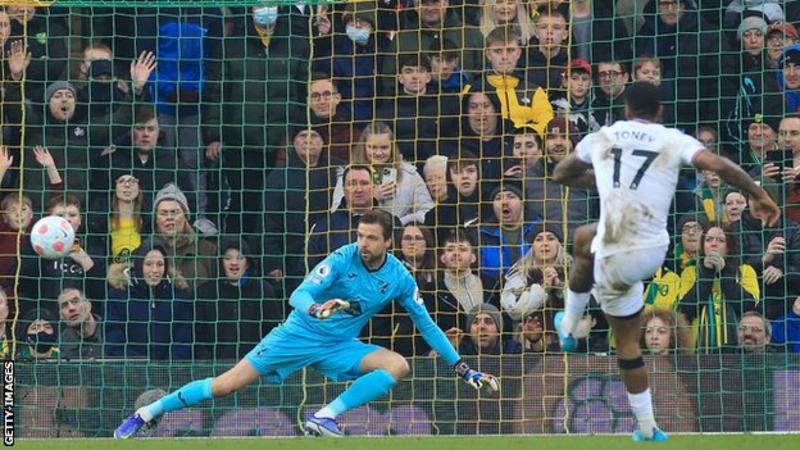 Following his emotional return as a substitute last weekend – 259 days after his cardiac arrest at Euro 2020 in June – Christian Eriksen made his first competitive start for Brentford.

It was from an Eriksen corner that Brentford punished the hosts’ first-half profligacy, with Kristoffer Ajer’s near-post header falling to Toney.

Toney’s first spot-kick arrived after 52 minutes as referee Anthony Taylor reviewed a high foot by Ben Gibson on Pontus Jansson as the Norwich defender attempted to clear a cross.

A second penalty in six minutes, awarded after Toney was felled by Gibson, allowed the 25-year-old to complete his treble.

The damage had already been done when Milot Rashica had a response ruled out for offside midway through the second half, while Bryan Mbeumo was denied adding a fourth for Brentford for the same reason.

Teemu Pukki gave the home fans something to cheer in added-time but an otherwise miserable day for Norwich left the Canaries five points from safety with 11 games remaining.

Seven days on from his long-awaited return to action, Eriksen was called upon from the start in another crucial fixture in Brentford’s bid to avoid an immediate return to the Championship.

While Toney delivered the goals that secured a huge three points, the victory proved that the ability of former Tottenham player Eriksen to reignite Brentford’s season will go a long way to determining the Bees’ fate with 10 games remaining.

The Dane’s delivery to set up Toney’s 32nd-minute opener displayed Eriksen’s known quality from set-pieces, but in a contest with so much riding on it the midfielder offered a calming influence in possession.

He had more touches (66), made more passes (44) and more passes in the final third (16) than any team-mate as he played the entirety of the 98-minute contest.

Amid the pressures of the Premier League, there was time too for a touching moment. Eriksen, rightly, received a yellow card for bringing down Brandon Williams – but once the Norwich defender realised who had fouled him, he simply embraced his opponent.

On Eriksen’s performance, Brentford boss Frank said: “You could see it was a top delivery for the first goal. There were top passes where he tried to find his team-mates in behind. You can also see there’s more to come from him, which of course is a positive.”

On hat-trick scorer Toney, Frank added: “It is world-class. I have said this before but for me Ivan Toney is the best penalty taker in the world at this moment in time.”