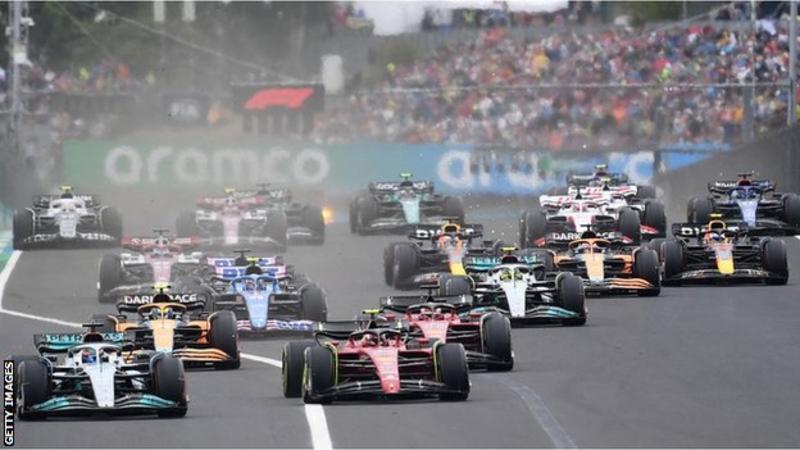 Red Bull’s Max Verstappen drove an outstanding race to win the Hungarian Grand Prix from 10th on the grid despite a spin costing the lead.

The result left Verstappen with an 80-point lead over Leclerc with nine races remaining, an advantage that looks unassailable given Red Bull’s steadiness and Ferrari’s flakiness.

A race gripping from start to finish, featuring divergent strategies, and the constant threat of rain on a grey, windy and cool day, provided a perfect symbol of the season so far.

Verstappen was imperious in moving through the field from his lowly grid position, caused by engine problems, Red Bull solid and aggressive on their strategy, and Ferrari uncertain as they converted second and third on the grid to having neither driver on the podium at the finish.

Verstappen and Red Bull had used soft tyres for the start to gain ground in the first stint, and by the time the field had settled down after the first pit stops, he was in fourth place and within three seconds of Russell, Leclerc and Sainz, Ferrari having pitted the Spaniard four laps earlier than his team-mate in an apparent attempt to get Leclerc in front.

The Ferraris began to pressure Russell and Leclerc took the lead on lap 31, and Verstappen was still fourth when he pitted for a second time seven laps later for a second set of mediums.

Leclerc and Russell followed him in a lap later trying to cover him off, but Russell came out behind the Red Bull and Ferrari made an error by fitting the hard tyres, on which Leclerc found no grip.

Within two laps of his stop, Verstappen had passed Leclerc, only to spin at the penultimate corner on the next lap, handing the de facto lead back to the Ferrari, before catching and passing him again four laps after his spin.

Once in the lead, Verstappen never looked like losing control as the race became all about those behind him.