How Nigeria neutralised Mohamed Salah in win over Egypt 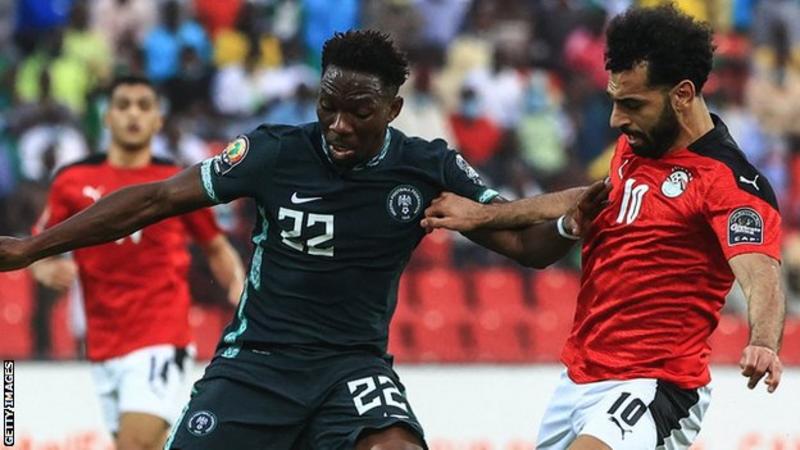 The build-up to Tuesday’s crunch clash between the two Group D favourites centred around the Liverpool star, who is widely regarded as the best player in the world at the moment.

But Salah cut an isolated figure as the Pharaohs struggled to impose themselves in Garoua, while the West Africans dominated the game.

“In terms of preparation and strategy, we had a special plan for Mohamed Salah because we know his quality,” Eguavoen told BBC Sport Africa.

“Basketball is one game that I love so much. When you are playing against the likes of Allen Iverson, Michael Jordan and others if you don’t double-team, you’ll have a problem.

“That is the same strategy that I bring into football. So, when Mo Salah is with the ball, the closest person goes to him and the next person has to double-team to make him play back.

“It worked for us like 80%, but Salah broke loose one or two occasions which is normal, but again congratulations to the boys because they are so intelligent.”

The 56-year-old, who heaped praise on the competitive spirit of his depleted side, added: “Let’s not go too far ahead of ourselves. But I am extremely proud of the boys.”

“There were comments and stuff being said about them before the tournament but they are absolutely professional. When you tell them something it sinks in immediately and that is a good thing, we’ve got going well for us.

“They followed instructions, they did exactly what we wanted them to do. When you are tired someone automatically fill the gap for you. This is the only spirit that can take us very far. Respect the players and they return the treatment.”

Three-time African champions Nigeria will face Sudan on Saturday (16:00 GMT), before finishing their Group D campaign against Guinea-Bissau on 19 January.

DEFENDING CHAMPIONS, DESERT FOXES HELD TO A STALEMATE BY THE LEONE STARS