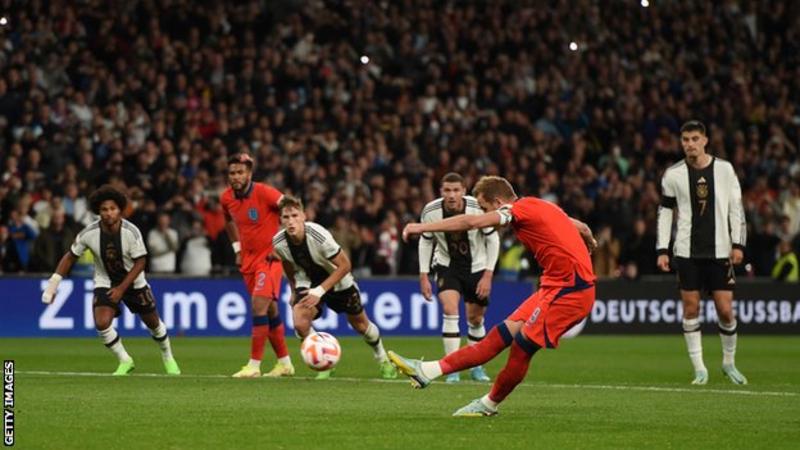 England were denied a dramatic win after a late error by goalkeeper Nick Pope halted a superb comeback and gifted Germany an equaliser in the Uefa Nations League clash at Wembley.

In a game of fluctuating fortunes, Germany looked on course for victory as two bad mistakes from the hapless Harry Maguire put Hansi Flick’s side in control.

England manager Gareth Southgate has remained fiercely loyal to the defender despite his struggles at Manchester United but the decision backfired badly.

Maguire lost possession then brought down Jamal Musiala to concede the penalty from which Ilkay Gundogan gave Germany the lead seven minutes after half-time then lost the ball and was left out of position as Chelsea’s Kai Havertz curled in a superb second after 67 minutes.

England were facing a third successive defeat but showed great character and resilience to turn the game around and move within sight of what would have been a morale-boosting win in the last game before the World Cup in Qatar.

Luke Shaw pulled one back then a superb equaliser from substitute Mason Mount and a Harry Kane penalty, given after a foul on Jude Bellingham by Nico Schlotterbeck, looked to have capped an unlikely fightback in the space of 12 minutes.

Sadly for Pope, hoping to stake his claim as deputy to first choice Jordan Pickford, he fumbled a routine shot from Serge Gnabry with three minutes left, leaving Havertz to pounce and condemn England to their worst run of results since 1993.

Southgate was stretching reality by claiming England’s performance in defeat to Italy on Friday was “a step in the right direction” but there was much more to be satisfied about here despite have to settle for a draw and sixth game without a win.

England showed more attacking intent without the final flourish in the first half and demonstrated real character to battle back from two goals down, with the mood inside Wembley just starting to turn and Germany looking in command.

With nothing to lose and the handbrake off, and with substitutes Mount and Bukayo Saka prominent, England finally gathered the momentum they have lost in recent times and turned the match on its head, finally exerting pressure on Germany and reaping the rewards of those three quick goals.

If England had suffered another loss, it would have been a damaging finale before the World Cup gets under way but the manner in which they picked up the pace to punish a rocky Germany offered more optimism than in any recent performances.