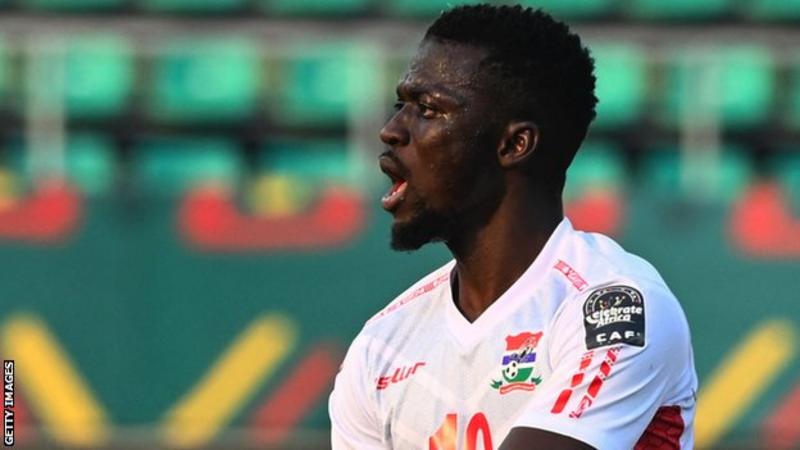 Debutants The Gambia booked their place in the quarter-finals at the Africa Cup of Nations as Musa Barrow’s goal gave them a famous 1-0 victory over Guinea.

Bologna forward Barrow collected a pass and slotted past Aly Keita from the centre of the box in the 71st minute.

Defender Ibrahima Conte had an equaliser ruled out for offside before The Gambia’s Yusupha Njie was sent off.

Guinea struck the post in injury time before another shot was tipped onto the crossbar by Baboucarr Gaye.

It was a stunning save by Gaye to keep out the powerful strike by Jose Kante, which came immediately after Conte had rattled the left-hand upright from a narrow angle.

Even then, Guinea forward Morgan Guilavogui latched onto the rebound off the bar and had his follow-up attempt blocked by Pa Modou Jagne.

Kante headed over from the resulting corner and the Scorpions, the lowest-ranked side at the tournament, held on to win as Guinea centre-back Conte was also dismissed in injury time for a second booking.

The Gambia, who are 150th in the world, will now face Cameroon in the last eight on Saturday after the hosts saw off Comoros 2-1.

The Gambia went unbeaten through the group stage, beating Mauritania and 2004 champions Tunisia, and Tom Saintfiet’s side pulled off another giant-killing in Bafoussam.

They had few clear-cut openings, with their best chance in the first half coming when Barrow stung the palms of Keita with a long-range strike.

The Scorpions were at times careless in possession, gifting Mohamed Bayo a sight at goal just after the half-hour mark, but the striker had his shot blocked by James Gomez before Gaye smothered Bayo’s follow-up.

In the second half, defender Omar Colley denied Guinea midfielder Ilaix Moriba with a well-timed challenge shortly after Kante had sent a header over.

Yusupha Bobb set up the winner with a fine pass to Barrow, but the debutants survived a nervy and frantic finale after substitute Njie was sent off with three minutes left following two harsh cautions.

The Gambia’s lowly position in the world rankings is underlined by the fact they began their Nations Cup qualifying campaign in the preliminary round, where they needed penalties to beat Djibouti back in October 2019.

But the Scorpions showed steely determination to extend their run in Cameroon with another historic result.