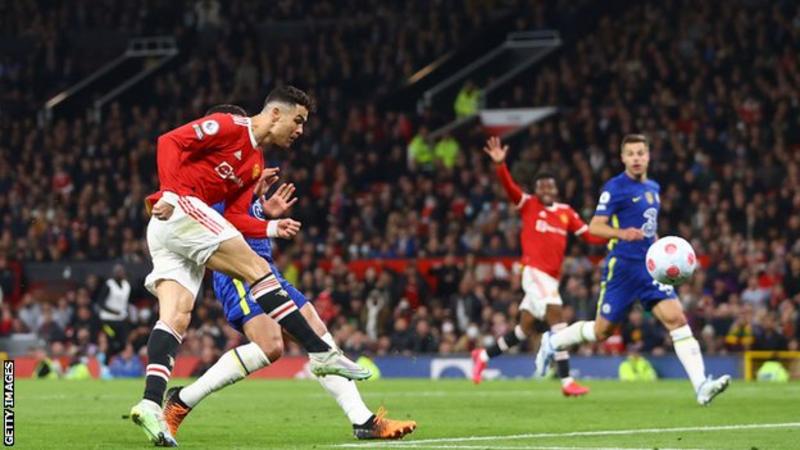 Cristiano Ronaldo scored his 17th goal of the season to earn Manchester United a point after David de Gea had frustrated Chelsea with several superb saves.

The visitors were thoroughly dominant in the first half at Old Trafford but were unable to find a way past De Gea, who made saves from Kai Havertz and N’Golo Kante.

But Chelsea finally broke the deadlock midway through the second half when Marcos Alonso volleyed home from an angle.

The Blues’ celebrations had barely finished as Manchester United responded within a minute, Nemanja Matic playing a brilliant ball into the box and Ronaldo taking a touch before thumping a shot into the net.

That brought Old Trafford to life – there had been a subdued atmosphere inside the ground up to that point, while discontent against the club’s owners was still clear as protests were held outside for the second home game in succession.

Reece James hit the outside of the post while Ronaldo could have secured all three points for the hosts but his effort from a difficult angle was saved by Edouard Mendy.

But the game ended all square as Chelsea edged closer to securing a top-four finish. Thomas Tuchel’s side are third, eight points ahead of fifth-placed Tottenham with five games remaining.

Manchester United are sixth, five points behind Arsenal in fourth but having played two games more.

Interim manager Ralf Rangnick had challenged his side to finish the season as strongly as possible, even though he had suggested a top-four finish was “unrealistic” following last Saturday’s 3-1 defeat at Arsenal.

But for an hour of this game, it looked as if that call had gone unheard as the home side put in yet another disappointing display.

They were lethargic and lacked the drive that Chelsea’s players showed, and the visitors should have been out of sight as they peppered De Gea’s goal with first-half efforts.

The best of those were by Havertz, who broke clear midway through the first half only to be denied by De Gea, before putting a close-range header straight at the goalkeeper.

When Chelsea scored, an away win seemed inevitable – but not for the first time this season, Ronaldo came to his side’s rescue.

His value to the team has often been questioned since his return to Old Trafford but, at the age of 37, he continues to defy the odds as he moved joint-second on the Premier League top scorers list with 17 goals.