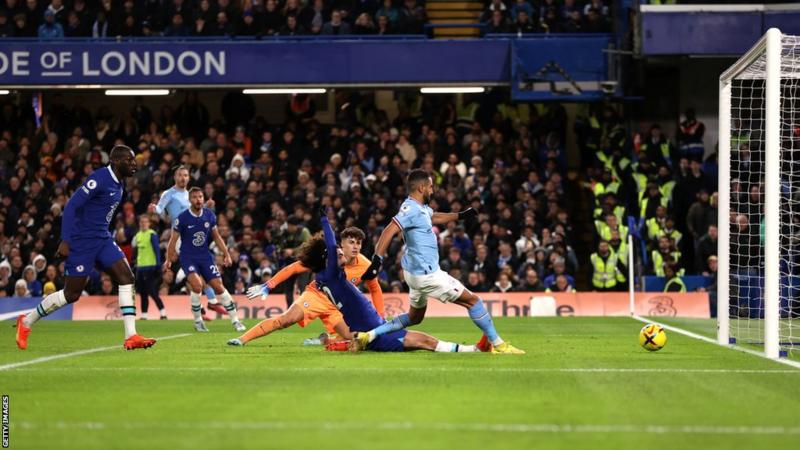 The reigning champions struggled in the first half before two of manager Pep Guardiola’s substitutes combined to break the deadlock after 63 minutes, Riyad Mahrez turning in Jack Grealish’s low cross at the far post.

Chelsea enjoyed the better of the first half despite adding both former City forward Raheem Sterling and Christian Pulisic to a lengthening injury list, substitute Carney Chukwuemeka hitting the post from the edge of the area.

Graham Potter will justifiably point to Chelsea’s ill-luck with absentees but the bottom line is this defeat leaves them in the unaccustomed position of 10th, 10 points off the Champions League places.

City, meanwhile, will be happy to get three points despite being nowhere near their best and on a rare night when scoring machine Erling Haaland failed to hit the target.

City were nowhere near their best but the celebrations at the final whistle were a sign that this was the sort of fighting win that is the trademark of champions.

Guardiola’s side struggled in the first half with three in central defence but the manager reverted to four in the second half in what was an ominous show of strength from his substitutes’ bench.

And it worked to settle this tight encounter as Chelsea keeper Kepa Arrizabalaga failed to cut out Grealish’s cross and Mahrez got in ahead of Marc Cucurella to make the decisive contribution.

John Stones was singled out for special acclaim by City’s travelling fans at the final whistle and rightly so after another outstanding performance, the highlight coming with a superbly-timed tackle on Pulisic in the six-yard box with the game in the balance.

City will have better days and nights than this but the main objective here against a tough opponent was a win that would make up for the disappointing home draw against Everton, and this was very much mission accomplished.

Gianluca Vialli obituary: One of the greats with a reputation to match