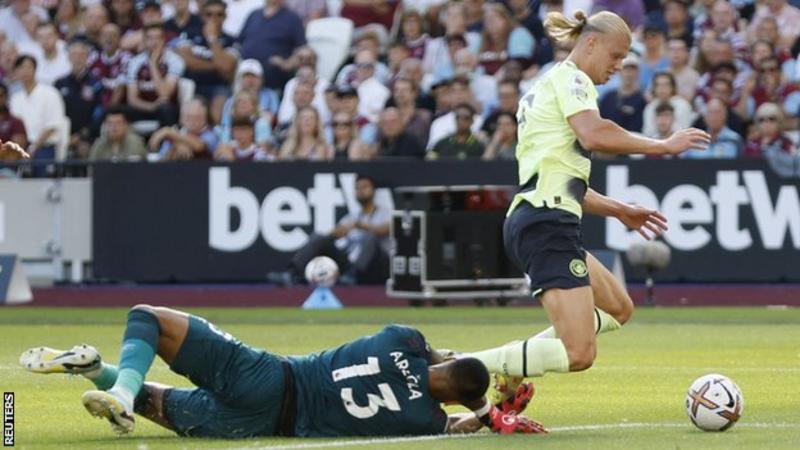 Erling Haaland opened his Manchester City goal account and demonstrated the huge threat he will pose this season as the champions began the defence of their Premier League crown in impressive fashion at West Ham United.

The brilliant 22-year-old Norwegian striker delivered exactly what City manager Pep Guardiola wanted following his summer signing from Borussia Dortmund when he gave City the lead from the penalty spot nine minutes before half-time, after he was brought down by West Ham’s substitute goalkeeper Alphonse Areola.

He was on as substitute for injured Lukasz Fabianski but was helpless when Haaland wrapped up City’s win after 65 minutes with a composed left-foot finish from Kevin de Bruyne’s perfect pass.

City won at a canter against a strangely passive West Ham, who barely threatened after a brief opening burst, spending long spells out of possession as the champions exerted almost complete command. 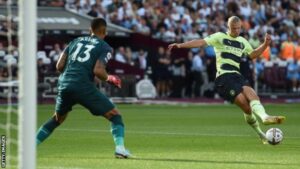 Manchester City have wasted no time in demonstrating they will be the team to beat in the Premier League title race this season with a superbly controlled display.

Once City had seen off West Ham’s early efforts they dominated possession and won with so much to spare that there were thousands of empty seats in London Stadium long before the final whistle.

City did not need to exert themselves but they present an ominous prospect for their rivals with the power, skill and goalscoring ability of Haaland bolted onto the sort of service he will receive from the likes of De Bruyne and Phil Foden.

Guardiola gave his other summer signing, England midfield man Kalvin Phillips, a couple of minutes to ease in with the game won.

And an encounter that was flagged up as a potentially fierce test for City proved to be a stroll, with three points a formality long before the end.

Haaland will rightly claim the headlines but all of City’s other qualities were on show in a package that will have Premier League defences looking nervously at what might face them when they meet Guardiola’s side.

This was as easy as it gets against a West Ham side who tested City to the limit here last season and were a formidable prospect at home – but not here as they were put away with consummate ease.