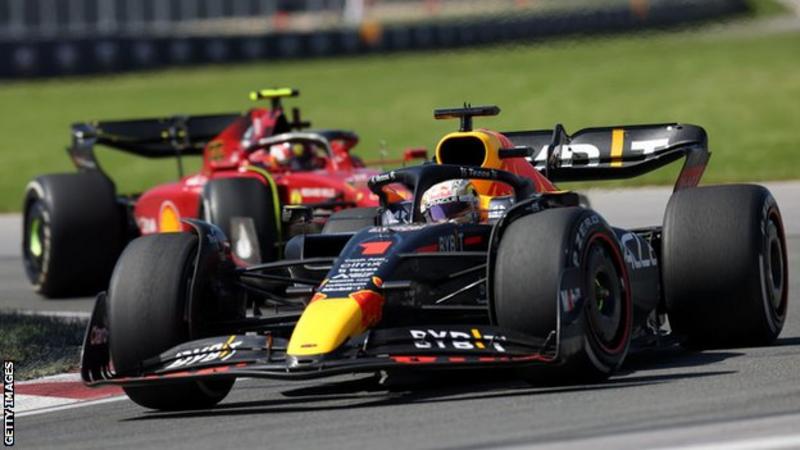 The two started the final 15 laps nose to tail after a late safety car but, despite heavy pressure from Sainz, Verstappen held on with older tyres.

Lewis Hamilton and George Russell took third and fourth for Mercedes as Ferrari’s Charles Leclerc recovered to fifth from the back of the grid.

Verstappen extended his championship lead over Leclerc to 49 points.

Red Bull’s Sergio Perez remains in second place despite retiring from the race with an engine problem but is only three points ahead of Leclerc.

Fernando Alonso, who starred in wet qualifying to start on the front row for the first time in 10 years, suffered from a questionable strategy from Alpine and some technical issues to finish seventh, behind team-mate Esteban Ocon.

Verstappen and Sainz played a cat-and-mouse game throughout a race punctuated by two virtual safety cars in addition to the final full safety car.

Red Bull pitted Verstappen under the first VSC on lap nine, caused when Perez pulled off, while Sainz stayed out, before the Spaniard stopped under the second 11 laps later, caused by Mick Schumacher’s Haas stopping out on track.

That set up a race defined by tyre offsets, with Sainz closing slowly on Verstappen through their second stints before the Dutchman stopped for a second time on lap 43.

Sainz then benefited from the final safety car, caused by Yuki Tsunoda crashing his Alpha Tauri on his way out of the pits.

The Ferrari driver had a six-lap tyre advantage over Verstappen for the final shootout but he was unable to get close enough to the Red Bull to mount an attack, despite following within a second for the entire final 15 laps.

Verstappen held on for his fifth win in six races, Red Bull’s sixth in a row, and his own sixth victory in nine races this season to further consolidate an ever-more convincing championship advantage.