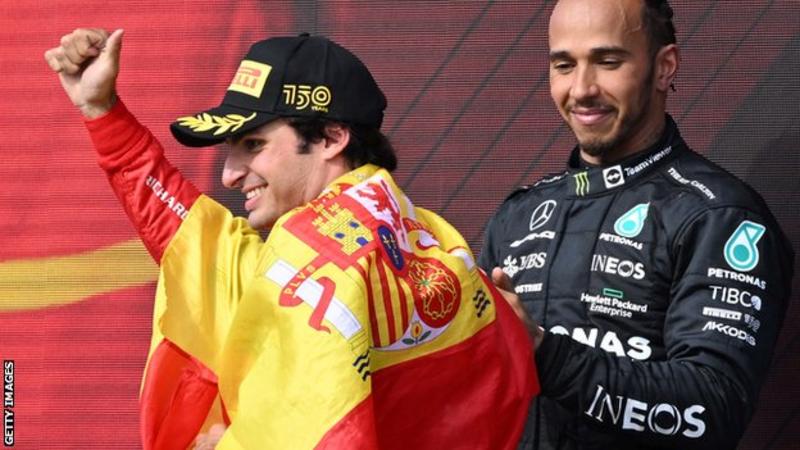 Ferrari’s Carlos Sainz took his first Formula 1 victory at the end of an extraordinary British Grand Prix packed full of incident and drama.

The Spaniard benefited from questionable strategy calls from Ferrari, which cost his team-mate Charles Leclerc the win and a chance to revive his title hopes.

Lewis Hamilton was in the battle for victory but finished third behind Red Bull’s Sergio Perez after a frantic final final nine laps following a late safety car.

Leclerc could finish only fourth and Ferrari missed the opportunity to make up significant ground in the title race on a bad day for championship leader Max Verstappen.

The Red Bull driver finished only seventh, his car slowed by rear bodywork damage, but lost only six points to Leclerc as a result of Ferrari’s race management.

Verstappen leads Perez in the championship by 34 points, with Leclerc a further nine adrift.

The race was delayed for an hour after a huge pile-up at the first corner caused a red flag, which took attention away from environmental protesters who had invaded the track after the start.

Alfa Romeo’s Zhou Guanyu vaulted the barriers at the first corner after sliding upside down across the gravel trap, but was freed from the car by paramedics and declared uninjured after a check-up at the medical centre.

Williams driver Alex Albon was flown to Coventry Hospital for precautionary checks after he was involved in a separate accident, Aston Martin’s Sebastian Vettel punting him into the pit wall.

The result was defined by a late safety car, as Leclerc was leading and pulling away from Sainz, who was coming under pressure from a charging Hamilton.

Ferrari chose to leave Leclerc out on his used hard tyres, while they pitted Sainz for new softs, a choice made by most other teams with drivers in the leading positions, including Mercedes for Hamilton and Red Bull for Perez.

When Leclerc was told of the decisions, he said: “That will be hard.” And he was right.

Sainz refused Ferrari’s request to give Leclerc as much space as possible at the restart and took the lead down the Wellington Straight and into Brooklands corner with nine laps to go.

Behind them, Perez passed Hamilton for third at Turn Four and the two of them closed on Leclerc.

There followed a few laps of quite brilliant racing.

Leclerc sat it out around the outside of Perez at Stowe as he defended his position with six laps to go, and tried to hold on into the slow Vale corner that followed.

Perez cut the apex of the second part of the chicane, a move that is being investigated by the stewards, and then forced Leclerc wide around Club.

This gave Hamilton the chance to nip inside both of them into second place, but Perez re-passed him into Turn Three on the following lap, and Leclerc also managed to get back ahead of the Mercedes at Turn Four.

Two laps later, Hamilton passed Leclerc around the outside of the long Luffield hairpin.

But Leclerc would not give way and he repassed Hamilton around the outside of the 180mph-plus Copse corner, despite his worn tyres, before Hamilton finally gained the place for good into Stowe with three corners of the lap to go.