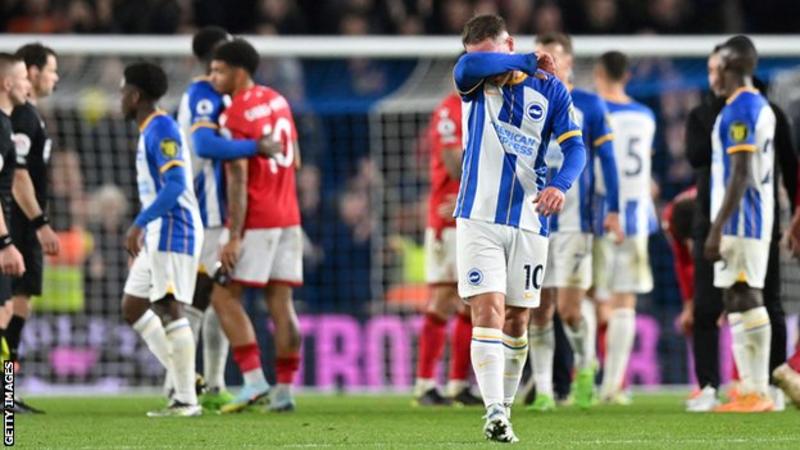 The Seagulls have averaged just above a goal a game in the past three seasons.

However, an opening-day victory at Old Trafford plus impressive wins over West Ham and Leicester suggested those longstanding issues were resolved. And the Italian’s first game at the helm was a 3-3 draw at Liverpool.

But since then precious little has gone right for De Zerbi’s side, who have failed to score from 54 shots in three fixtures since their trip to Anfield.

Nineteen of those efforts came against Forest, who arrived on the south coast propping up the table.

Leandro Trossard smashed an effort on to the visitors’ crossbar and an inspired Dean Henderson in goal for Forest also superbly saved from the Belgian and Pascal Gross, while Adam Webster and Joel Veltman were guilty of glaring misses.

De Zerbi told BBC Sport: “In my experience in the Premier League it’s not the first time my team play like this and we can’t win. We shoot 19 times, we have a lot of chances.

“You can choose the way to win. You can choose what style of play you can play. These players have chosen their way. I really like this way. This evening we’re sorry for the result. This is our way to achieve our result.”

Since Brighton’s first Premier League season in 2017-18, they have failed to score in more games (72) and played out more goalless draws (23) than any other side in the competition.

And based on their chances against Forest, Brentford and Tottenham, they have drawn a blank in each from from 4.53(xG) with the daunting prospect of a trip to champions Manchester City to come on Saturday (15:00 BST).

If their failings in front of goal continue it will threaten to undermine a fine start to the campaign and leave their fans with a familiar feeling of exasperation.