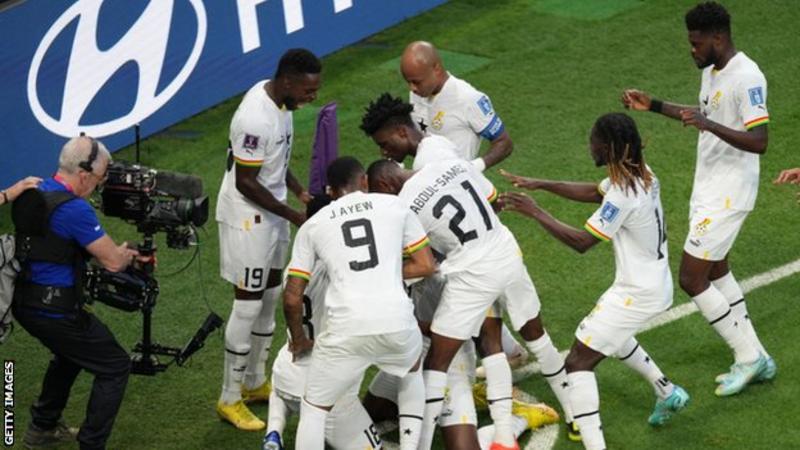 Ghana won an exhilarating match packed with twists and turns against South Korea in front of a vibrant crowd at Education City Stadium in Qatar.

A 10-minute spell in the first half by the African nation gave them a 2-0 lead courtesy of goals from Southampton defender Mohammed Salisu and Ajax’s Mohammed Kudus.

However, noisy celebrations by Ghana fans at half time were dampened by a South Korea comeback after the break.

Two stunning headers in three minutes from Cho Gue-sung, top-scorer in his domestic league, levelled the game after 61 minutes.

But the impressive Kudus, who had deftly headed in Jordan Ayew’s cross in the first half, added a final twist when he thumped in a third for Ghana to break South Korea’s hearts.

Chances continued to fall South Korea’s way as they searched for another equaliser but, despite 10 minutes of added time, Ghana held on.

There were emotional scenes at the final whistle as many South Korea players fell to the ground while manager Paulo Bento was sent off for arguing with English referee Anthony Taylor for not allowing a corner to be taken despite the 10 minutes having elapsed.

In contrast, elated Ghana substitutes sprinted onto the pitch to celebrate as fans in the stand blew whistles and danced in celebration. 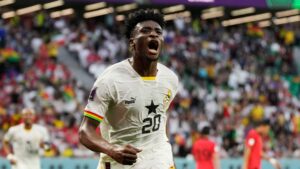 It was a frenetic game from beginning to end as both teams enjoyed spells of pressure without ever gaining sustained control.

He was locked in a battle with young Brighton full-back Tariq Lamptey down the wing but Ghana defended well and limited South Korean chances.

Then came Ghana’s two goals in 10 minutes and as Bento’s side trudged off the field at half time, a way back into the game did not appear likely.

Southampton’s Salisu pounced on a scramble in the box to poke in the opener after 24 minutes before Kudus flicked on Ayew’s cross and sprinted to the corner flag in delirious celebration.

But Gue-sung suddenly had South Korea fans on their feet – with some even close to tears – after two superb headers brought the teams level and briefly silenced the dancing Ghana supporters.

The momentum was with South Korea but Kudus was clinical when he thumped in a third and decisive goal after team-mate Inaki Williams had missed a cross from the left.

Ghana goalkeeper Lawrence Ati Zigi was forced into several saves in the closing minutes as South Korea threw everything at Ghana but to no avail.

The scenes at full time indicated the importance of the result to both teams, the real significance of which will be felt after the Uruguay-Portugal game in Monday’s late kick-off in Group H. 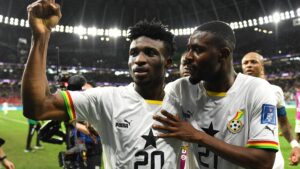 INDOMITABLE LIONS SECURE 3-ALL DRAW WITH SERBIANS IN THRILLER