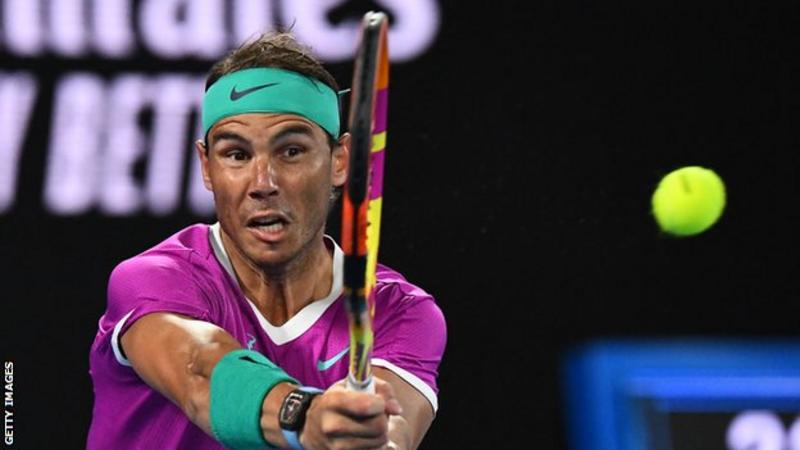 Rafael Nadal moved one win away from a record 21st Grand Slam men’s title after a dominant start enabled him to beat Italy’s Matteo Berrettini in the Australian Open semi-finals.

Seventh seed Berrettini eventually turned the match into a contest, but Nadal completed a 6-3 6-2 3-6 6-3 win.

The 35-year-old Spaniard is level on 20 major titles with long-time rivals Novak Djokovic and Roger Federer.

“The first two sets were some of the best I’ve played for a long time,” said Nadal, who won his only Melbourne title in 2009.

“Against a difficult opponent, a great opponent, one of the best of the world, I was able to play I think at a very high level for a long time.

“I had to suffer and I had to fight but it means a lot to be in the final again.”

Nadal’s achievement in reaching a 29th Grand Slam final comes only a few months after he thought a foot injury could end his illustrious career. 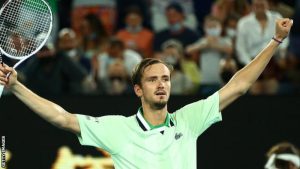 Medvedev, 25, is aiming for his second successive Grand Slam title after winning the maiden major of his career at the US Open in September.

He is also looking to go one step further in Melbourne after losing in last year’s final to Djokovic, who did not play this year after being deported from Australia in a visa row related to him being unvaccinated.

Without Djokovic, Medvedev was seen as the tournament favourite but found Tsitsipas – another tipped to take advantage of the Serb’s absence – in his way of a second successive final.

In his third Melbourne semi-final, Tsitsipas played at a high level in the opening two sets but fell away in the aftermath of Medvedev complaining the Greek was receiving on-court coaching.

The pair have had a spiky relationship in the past and Medvedev’s accusations added another layer of drama to the high-quality tennis.

In a rant during the changeover at 5-4 down in the second set, Medvedev demanded umpire Jaume Campistol issue a violation to Tsitsipas for taking instructions from his father and coach Apostolos.

“I don’t think bad emotions help me too much, many times I have lost a match because of this,” Medvedev said.

“You lose concentration and you lose energy. As soon as I did it I thought it was a big mistake. But I knew I had to refocus, I tried my best and I’m happy for it.”

Afterwards, Tsitsipas denied he had been receiving coaching and suggested Medvedev’s rant was a “tactic”.

Umpire Campistol did issue a warning to Tsitsipas at 1-1 in the fourth set and from that point he did not win another game as Medvedev beat him for the second year in a row.