Presidential candidate of the People’s Democratic Party (PDP) has commended the governor of Oyo state Engineer SEYI MAKINDE for supporting the presidential flag off campaign of the party today at Mapo hall in Ibadan, Oyo state capital.

The presidential aspirant said he is aware of the clamor for restructuring in the Southwest, while promising that h 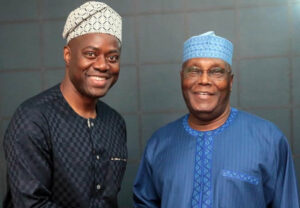 e will implement his 5 campaign agenda which includes commitment to good education, industrialization of the southwest, inclusion and control of the security situation in the country.
Alhaji ATIKU also made it clear that should he be elected as next Nigeria’s president, the country`s education system will be revived.

Meanwhile, against reports that governor MAKINDE will be present at the rally, he was however absent, as well as some senatorial candidates of the party but he was well recognized by every party stakeholder who spoke during the campaign, as they urged party members to vote for the governor.