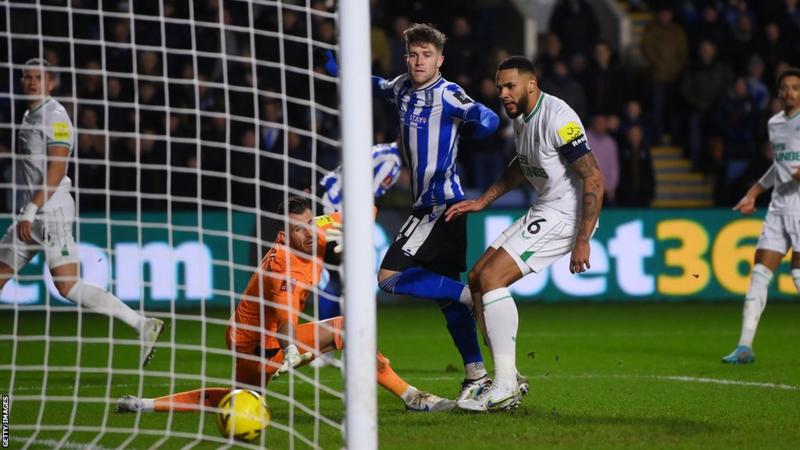 League One side Sheffield Wednesday pulled off a memorable FA Cup shock as they knocked out the Premier League’s third-placed side Newcastle United.

Josh Windass scored twice in the second half for the Owls as they came out on top in a pulsating tie at Hillsborough.

Substitute Bruno Guimaraes gave Newcastle hope with more than 20 minutes left with a close-range finish but they could not force an equaliser.

It is the first defeat for Eddie Howe’s side since 31 August against Liverpool.

After both sides spurned good opportunities in a lively first half, Windass opened the scoring seven minutes into the second period when he finished off a flowing move.

George Byers started it with a clever turn just inside the Newcastle half before driving towards the penalty area.

He fed the ball wide to Liam Palmer, who slipped in Dennis Adeniran and his cross-shot was turned in by Windass.

The forward looked as if he may have been slightly offside but the assistant did not flag and with no VAR in operation, the goal stood.

There was nothing controversial about the second. Windass was sent clear by Michael Smith’s fine first-time pass and showed terrific composure as he opened up his body and curled the ball past Martin Dubravka into the corner of the net.

Hillsborough was bouncing but the home side’s lead was halved just four minutes later when Brazil midfielder Guimaraes, who also looked to be close to offside, stabbed in from a yard out after the Owls failed to deal with a corner.

“It’s one of the proudest moments in my managerial career,” Owls manager Darren Moore said.

“I’m really pleased for everybody at the club and I’m delighted for the players. We were up against a really good team and put in an excellent performance.

“We knew we had to perform on and off the ball, and the way we went about it was spot on. We believe we can score goals, we got them, and then were resolute to the onslaught at the end.”

Windass almost completed his hat-trick with a ferocious long-range free-kick that came back off the bar and although home goalkeeper Cameron Dawson made a number of vital saves, he could only watch as Chris Wood blazed Newcastle’s best chance of an equaliser over with eight minutes to go.

“We didn’t allow them to settle into their rhythm and that gave us some hope in the game,” added Moore. “I thought every one of them did well. Josh will get the headlines but Cameron pulled off a couple of great saves.

“You know you’re going to get tested against teams like this so your keeper has to concentrate and be in the right place when needed, and he was.”