Liverpool took a huge step towards the Champions League quarter-finals after scoring two late goals against Inter Milan in the San Siro.

The Reds looked set for a goalless draw in the first leg in Italy until Brazil forward Roberto Firmino got on the end of Andrew Robertson’s corner to head his side into the lead.

Mohamed Salah added a second with a deflected effort from inside the box which means Jurgen Klopp’s side take a sizeable advantage into the second leg at Anfield on 8 March.

Italian champions Inter hit the bar through Hakan Calhanoglu and were on top for long periods of the second half before Firmino struck in the 75th minute.

Liverpool scored from their only two attempts on target and will be firm favourites to progress when the two sides meet in the deciding leg next month.

It was a particularly memorable night for midfielder Harvey Elliott, who became the youngest player ever to start a match in the competition for Liverpool at the age of 18 years and 318 days.

The only negative on an otherwise upbeat night for the Reds was an injury to Portugal forward Diogo Jota, who was replaced by goalscorer Firmino at the start of the second half after suffering an ankle injury.

Liverpool have now won seven successive matches in all competitions, with this arguably the most impressive of the current run.

But Klopp’s team had to dig deep as Inter looked the more threatening side after a strong start by the Premier League club.

Former Manchester City forward Edin Dzeko found himself clean through in the first half before a vital challenge by Virgil van Dijk, who was captaining the Reds in the absence of Jordan Henderson.

The hosts went close again when Ivan Perisic whipped in a cross, but Lautaro Martinez was unable to give Inter the lead.

There is still work to do for Klopp’s team but it is going to require something extra special from Inter to turn this tie around.

Liverpool remains in the hunt for four trophies and could have one in the bag by the time Inter visit Merseyside, with the Reds facing Chelsea in the Carabao Cup final at Wembley on 27 February. 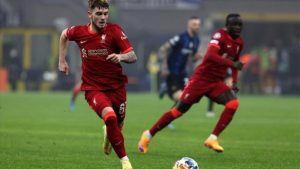