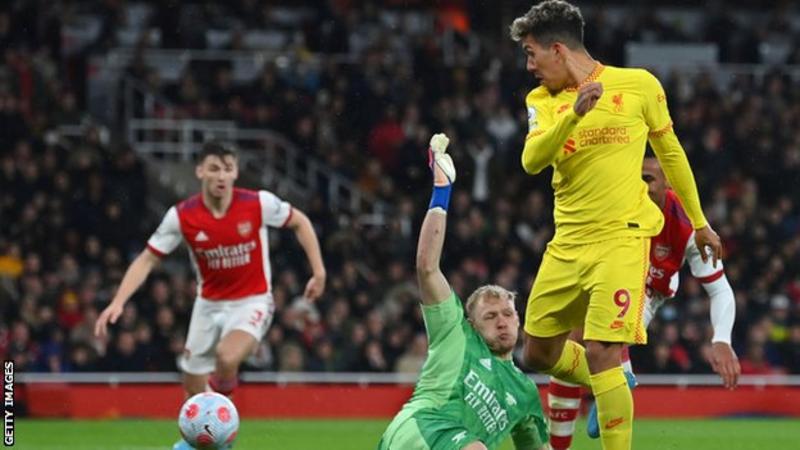 Liverpool moved to within one point of Premier League leaders Manchester City as they emerged impressive winners after a tough examination at Arsenal.

The Gunners, well in the fight to finish in the top four, pushed Liverpool hard until Jurgen Klopp’s quadruple-chasing side ruthlessly took control after the break.

Liverpool keeper Alisson saved crucially from Martin Odegaard after Thiago’s misplaced backpass before Diogo Jota put Liverpool ahead, beating Aaron Ramsdale at his near post in the 54th minute.

Jota and Luis Diaz were immediately replaced by Mohamed Salah and Roberto Firmino, the latter doubling Liverpool’s advantage just after the hour mark with a perfect flick from Andrew Robertson’s cross.

Liverpool have now reeled off nine Premier League wins in succession while Arsenal remain in fourth, a point ahead of Manchester United but with two games in hand.

Once Jota made the breakthrough for the visitors there was no way back for the Gunners, but before then the Reds were indebted to Alisson’s significant contribution when he made that block from Odegaard.

To that point Arsenal were in confident mood, playing fearlessly, but they were again undone by Jota – the scourge of Mikel Arteta’s team in the Carabao Cup semi-final in January – although the Portuguese was helped by Ramsdale’s weak effort to save his near-post shot.

Klopp’s Midas touch worked again when he removed Jota and substitute Firmino showed his silky touch to slide a near post flick past Ramsdale.

Arsenal were deflated and Liverpool moved even closer to Manchester City, who were held to a draw here in the capital by Crystal Palace on Monday.

The advantage still lies with Pep Guardiola’s reigning champions – but the margin is slender and this was another potentially difficult hurdle overcome by Liverpool.

Arsenal’s players were applauded off by the home fans at the final whistle in recognition of their efforts, especially the outstanding Gabriel Martinelli, who gave Trent Alexander-Arnold a torrid time.

And they remain in prime position to achieve their remaining goal this season, a place in the top four, but they are still finding it tough to overcome the sides they will eventually want to rival.

Liverpool have now completed the league double over Arsenal, as have Manchester City, while they have also lost at home to Chelsea and away to Manchester United.

The Gunners were in contention for a long time, led by the verve of Martinelli, but ultimately it was Liverpool who had the cutting edge and greater quality.

There is no doubt Arteta’s Arsenal are on an upward curve and this was a far more convincing performance than that League Cup loss, but there is no doubt they still have a long road to travel before the old glories can be contemplated once more.