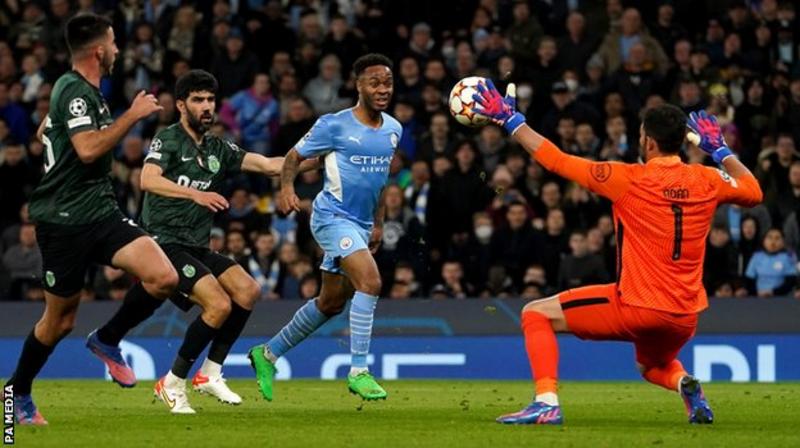 Manchester City manager Pep Guardiola said he has learned to “enjoy the moment” after his side cruised into the quarter-finals of the Champions League despite being held at home by Sporting Lisbon.

It is the fifth successive season City have reached the quarter-finals, while Guardiola has managed a team to this stage for a record-equalling 12th time.

“When you go through, every opponent is difficult. Now it is time to congratulate everyone, focus on the Premier League and see the draw.”

City’s stunning 5-0 win in last month’s first leg in Lisbon had already effectively settled this tie, and it was clear from the outset that the Portuguese side did not entertain any hope of an unlikely comeback.

Sporting packed their defence, perhaps wary of suffering another damaging defeat, leaving Guardiola’s side in total control of possession but struggling to carve out meaningful chances.

Raheem Sterling wasted City’s best opportunity before the break when he ran on to Phil Foden’s pass and tried to dink the ball over Antonio Adan but did not get enough height on his shot.

Gabriel Jesus did find the net for the home side at the start of the second half but a VAR review ruled he was offside from Riyad Mahrez’s pass and the goal was disallowed.

Despite being unable to make the breakthrough, City remained completely comfortable and Guardiola was relaxed enough to bring on third-choice keeper Scott Carson for Ederson with 20 minutes remaining.

The 36-year-old, making his first appearance of the season, was quickly called into action to deny Paulinho from close range, bringing chants of ‘England’s number one’ from the delighted City fans.

City will find out their quarter-final opponents on 18 March and Guardiola said it was a “good sign” that expectations have risen for the club.

“The last decade, step by step, the club grew and for many years we were there in the Champions League and qualifying for the last 16,” he added.

“Now, again, we’re in the quarter-finals and among the best eight teams in Europe.”

This was the first time since the end of October that City had failed to score at home but, while this performance lacked the sparkle of their win in Lisbon, they never loosened their grip on the tie.

Sporting did manage some efforts at goal before the end but in the early stages they barely got a kick, and seemed content to try to keep City quiet.

Until Sterling ran clear before half-time, there had been precious little goalmouth action at either end but the home fans, still chanting noisily about Sunday’s thumping derby win over Manchester United, did not seem to care too much.

City’s lack of fit or available defenders had been a cause for concern for Guardiola before kick-off but Sporting’s lack of ambition meant he had little to worry about on the night, and teenage defender Conrad Egan-Riley acquitted himself well on his debut at this level.

So too did veteran midfielder Fernandinho, who was making his 100th Champions League appearance, and seemed to relish his recall to the starting line-up.

There are much tougher tests to come for City this season, starting with their trip to Crystal Palace in the Premier League on Monday, but they made effortless progress here.