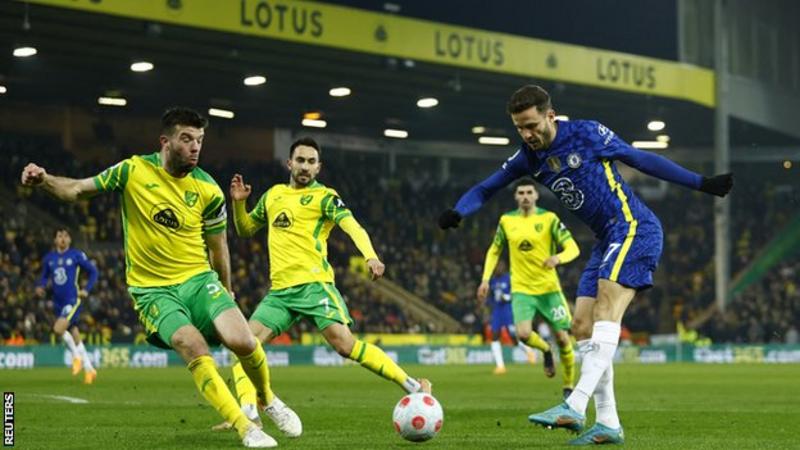 Chelsea beat bottom club Norwich as Mason Mount scored one and made another on the day his club’s long-term future was thrown into uncertainty.

Travelling fans at Carrow Road chanted the name of Roman Abramovich hours after it was announced Chelsea’s Russian owner had been sanctioned by the UK government.

On the pitch, Chelsea’s players responded to one of the most dramatic days in the club’s 117-year history by storming into a 2-0 lead inside the opening 15 minutes on their way to a fourth successive league win.

Trevoh Chalobah opened the scoring in the third minute after meeting Mason Mount’s corner before Kai Havertz set up England’s Mount for his eighth goal of the season.

Norwich were much better after half-time and Teemu Pukki gave his side hope from the penalty spot after Chalobah handled, but Havertz sealed the points with a late third for Chelsea.

While the win strengthened Chelsea’s grip on third spot, Norwich are five points from safety with just 10 games left.

While Chelsea’s future off the pitch is precarious right now, it was pretty much business as usual on it.

Captain Cesar Azpilicueta spoke before the game about “this not being a normal day” while boss Thomas Tuchel talked about “a lot of noise” around the club.

Within hours of the announcement that Abramovich had been sanctioned, Chelsea’ main shirt sponsors – mobile network provider Three – suspended its deal with the club.

Nevertheless, the Blues wore their usual kit with the sponsors logo as the timing of Three’s suspension made it impossible to get a fresh kit with no logo to Norfolk.

There were ‘Champions of Europe’ banners in the away end although the Abramovich chants were greeted with some boos from the home fans.

Yet any concerns Tuchel might have had about the day’s worrying off-field developments seeping onto the pitch were quickly dispelled as Chelsea raced into a 2-0 lead.

Chalobah got between Grant Hanley and Christoph Zimmermann to put the visitors ahead before Mount lashed home the second high into the roof of the net.

Andreas Christensen – out of contract at the end of the season and in a state of short-term limbo following today’s announcement that Chelsea are unable to offer new deals – went close with a header.

Mateo Kovacic grazed the woodwork from 20 yards and Mount was denied a second goal by Tim Krul before Havertz sealed Chelsea’s 10th Premier League away win with a fine 90th minute finish after a lay-off by N’Golo Kante.