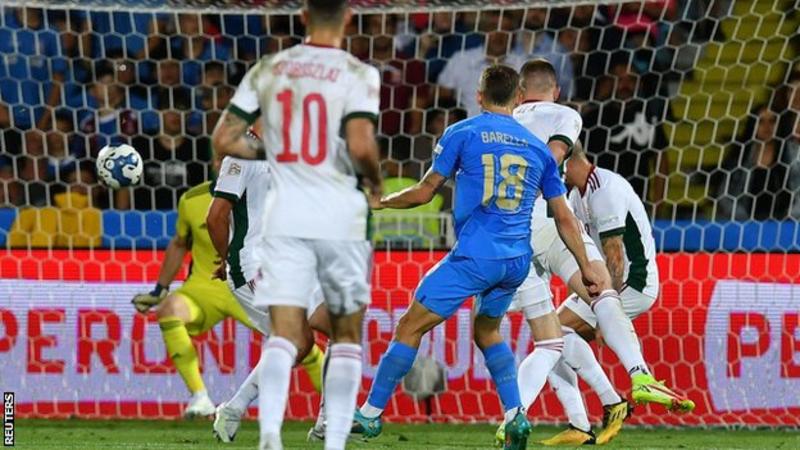 European champions Italy beat Hungary 2-1 to move top of Nations League Group A3 – the group England are in.

Italy went ahead when Nicolo Barella angled a strike into the top corner from the edge of the penalty area after good work from Leonardo Spinazzola.

Lorenzo Pellegrini doubled the hosts’ lead with a low shot from Matteo Politano’s pullback from the right.

Hungary, who beat England 1-0 on Saturday, pulled one back through Gianluca Mancini’s own goal.

Italy, who failed to qualify for the 2022 World Cup after losing in a play-off against North Macedonia, had chances to score before taking the lead in Cesena but Mancini twice had headers saved by Hungary goalkeeper Denes Dibusz.

After Barella’s goal, Italy pushed for a second and only an excellent sliding clearance from Loic Nego denied Wilfried Gnonto, before Pellegrini made it 2-0.

Politano almost added a third but saw his strike bounce off the crossbar.

It had appeared to be a comfortable evening for Italy, but Mancini’s slid the ball into the net when unchallenged following a cross from the right to give Hungary hope.

Italy now have four points from two matches after drawing 1-1 with Germany on Saturday.

England entertain Italy on Saturday, 11 June in a repeat of the Euro 2020 final last summer, which Roberto Mancini’s side won 3-2 on penalties after it had finished 1-1 at the end of extra time.

The match will be held at Wolverhampton Wanderers’ Molineux stadium with only a limited attendance after the Football Association was hit with sanctions following crowd trouble at the Euro 2020 final.

The FA was fined £84,560 for “the lack of order and discipline” at the match after hundreds of ticketless fans got into Wembley and fought with stewards after areas around the stadium became packed hours before the evening kick-off.

Children aged under 14, accompanied by an adult, will be allowed to enter, with an attendance of up to 3,000 expected.